Today In Unexpected Developments:
Florent To Reopen On Tuesday...
Without Florent

Pop-Up Du Jour:
Ananas On The Lower East Side 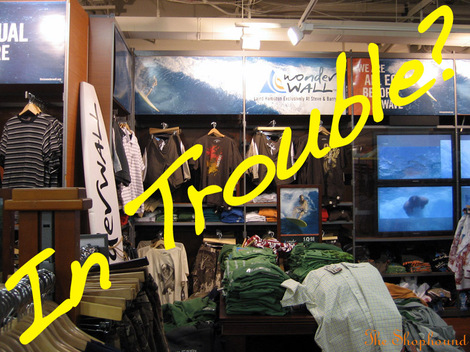 It's the same old story: Too much too soon.
Newly high profile retailer Steve & Barry's may be vanishing as quickly as it came to our attention.
Wasn't it only weeks ago that they announced the seemingly unstoppable chain would take over the former location of Tower Records at Broadway and West 4th Street? Now it seems unlikely that a store will appear there anytime soon, as Steve & Barrys has retained the services of Conway, Del Genio, Gries & Co., a restructuring firm specializing in turnarounds while Goldman Sachs Group scrambles to scrape together $30 million in emergency financing to cover a string of unpaid bills that are just coming to light.
Things are looking dire for the company that gained notice when Stephon Marbury chose them to launch a line of affordable branded clothing, and later went mega-huge nearly overnight with the publicity from Sarah Jessica Parker's Bitten line. A string of other celebrity endorsed and designed collections followed including efforts from Venus Williams, Amanda Bynes, surfer Laird Hamilton and golfer Bubba Watson. 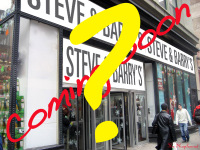 The problem? Those low, low prices everyone loves so.
Despite growing their volume to nearly $1 billion, their profit margins are still so narrow that the chain was unable to properly finance its rapid expansion plans leaving local contractors, advertising bills and even some longtime vendors unpaid. There are rumors that the retailer may have to file bankruptcy as early as next week.
Will Steve & Barry's vanish from the public's consciousness as quickly as it appeared, leaving its stable of celebrities with egg on their collective face?
Stay tuned. this story is developing.
Steve & Barry's Hits Trouble: Hyped Clothing Retailer Hires Turnaround Help (Wall Street Journal)
Steve & Barry's (Official Site)

Posted at 06:32 AM in Designer Collaborations, Disturbing Developments | Permalink | Comments (1)

THIS COULD NOT BE HAPPENING TO A BETTER COMPANY....THESE PEOPLE HAVE DESTROYED HOMES,LIVES AND PEOPLE....THEY TELL YOU THEY CARE BUT THEY DO NOT CARE IT'S ALL ABOUT THEM...KARMA IS A BEAUTIFUL THING.