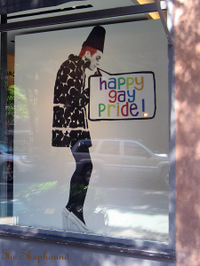 Marc Jacobs has added some speech balloons to his Interview Magazine windows in honor of Gay Pride Week. We suppose that's only appropriate when you are picured in high heels, a graphic patterned fur coat, an amusing hat and a face full of makeup, though Jacobs has been noting Gay Pride week in his Bleecker Street shops for several years now. In addition, he has added to his selection of printed t-shirts with one titled "Rebel Pride" designed by Jon Lynn which superimposes the pattern of the Confederate Flag over the Gay Pride rainbow in an unexpected mash-up of contradictory symbols for a mere $18.

While there was a brief period several years back when it was a fashionable statement to festoon oneself with rainbows for the Pride Parade, these days the symbol, while useful when posted in the windows of gay-friendly business establishments, has long since become pretty much radioactive as a fashion statement among The Gays of New York, replaced mostly by Abercrombie & Fitch.
Can Marc's peerless fashion clout make the rainbow flag hip once again by presenting it in a twisted, vaguely paradoxical, potentially controversial way?
We'll see this Sunday.
Marc by Marc Jacobs 382, 385 & 403-5 Bleecker Street, West Village

It's unfortunate that we continually overlook the hurtful, racist past of the symbol of the Confederate flag, and keep trying to reclaim it. And by "we," I mean white Americans who have no right to do so. This is one shirt I will never wear, and I hope that it never does become popular or "fashionable," to wear relics of slavery as kitschy, tongue-in-cheek statements.

Not much thought was put into that design, 5 more minutes and he could have really come up with something good. Sad. :-(

Mmmmm maybe I have been living abroad for too long, but I thought that if we aknowledge the Past then we will not make the same mistakes in the Futur. This being said what's the big deal with this T-shirt. Americans are so afraid and ashamed of its history concerning slavery/racisme, that the American society let's slip into everyday life the racisme that has yet to be dealt with from the past. I think it is more offensive to white americans because they want to forget, that way it will go away. By facing up to it "will make it go away" not hiding. Je suis un Gay African-American living with HIV and in a sometimes hostel country towards foreigners,so I know what i'm talking about!!

Styger wrote: "This is one shirt I will never wear, and I hope that it never does become popular or "fashionable," to wear relics of slavery as kitschy, tongue-in-cheek statements."
Although I live in Canada, I heartily agree. I am appalled at the crass ignorance displayed by both designer Jon Lynn and t-shirt hawker Marc Jacobs. Who would this appeal to, queer racists? Can these two not SEE how ugly, boorish and insensitive this would look to most African-Americans?
If I saw any queer wearing such an item, I would give them one helluva tongue-lashing -- and NOT in a good way!

There is a point of being TOO politically correct...you guys just sound like idiots spouting off things EVERYONE knows already....racism is awful. it's horrendous...unspeakable..and unforgivable. but this is not about racism (or the Civil War, for that matter). You guys seem to only know the confederate flag to be something hateful and I'm assuming you aren't well-read or maybe even intelligent. People have flown this flag as a symbol of of rebellion against the federal government of the United States.. like enemies of the U.S such as the Vietcong during the Vietnam War and the Iraqi Republican Guard. It's not just for white ignorant hicks! It's about rebellion and fighting back!

And for God's sake LIGHTEN UP. Why can't you be creative..think outside of the P.C. box..this shirt means so many different things to me...like gays being "rebels" and doing things their way no matter what and standing up to our government for equal rights! Stop making everything so negative and hateful!

And "nigger"or "faggot" is too.

I REPEAT... WHO would this appeal to? Racist queers?

IT'S MAKING FUN OF THE CONFEDERATE FLAG!

I'm glad some of you are on my side.
This t-shirt is in no way racist.
But most of you take yourselves way to seriously.
Chill out and have a sense of humor! Have a nice day.

ps. check out my music, maybe that will offend you some more

It's Ugly!
Nothing more, nothing less!

"IT'S MAKING FUN OF THE CONFEDERATE FLAG!
GET IT NOW?"

Well, let me guess, You're white, ain'tcha? Thought so.

To Jon Lynn -- have you even TRIED to run this stupid idea past any of your POC [Persons Of Colour] friends? ('Coz I just KNOW that Some of Your Best Friends Are,,,™ )

If you are going to comment on historical significance, make sure you have studied history first.

The Confederacy and it's subsequent secession from the union was about the form that the federal government should take. The issue of slavery did not come up until well after the war started and was used by President Lincoln as a strategic tool - nothing more.

The Confederate flag is less a symbol of slavery than the cross is - the KKK burned many people at the cross during the hight of their power.

Some things can never be reclaimed - especially if they should never have been claimed to begin with.

Rebellion, my ass. It was about money, and stepping on as many people as necessary to keep that money - to the point of not even regarding them as people. War of Northern Aggression, indeed. Not about slavery? Read the Constitution of the Confederate States of America some time, and get a clearer idea of the protections of the "right to slavery" held within that document.

And by the way, MS. Lynn? Your comment, "Chill out and have a sense of humor!" reads much like a quote from a schoolyard bully caught in the act by a teacher and acting misunderstood. Shame on you.

its kind of offensive, but you can't wear it to anywhere especially in midwest. people can agree to disagree, or vice versa.

the confederation flag represents, patriotism and laid into wrong hands of racists, and making the flag offensive. when you combine rainbow and their flag the obvious statement that is being proud for the shock value.

we gays have our gay pride, some closed-minded people find it very offensive and assume we are doing our pride week for shock value but its not for SV but to identify yourself within community, and represent who you are not necessarily to discriminate anyone.