Colette Is Coming...
But Just For A Minute 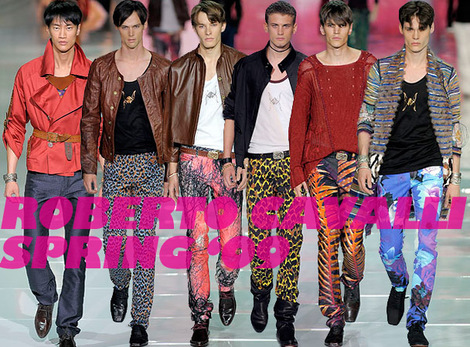 Sometimes there's nothing more entertaining than watching fashion designers take leave of their senses. Of course, The Shophound has not gone to Milan for the Men's Collections, but we can see enough on our trusty computer to enjoy one of our favorite pastimes: picking out the ridiculous outfits that nobody will ever wear.
Above, please find a selection from Roberto Cavalli, who after a few subdued seasons, has returned to his usual flamboyance with a vengeance, and a trip through a Pat Benatar video.
Is it time for tight, fancy patterned pants again?
No.
Will it ever be time for tight, fancy patterned pants?
Only if you are Pat Benatar. 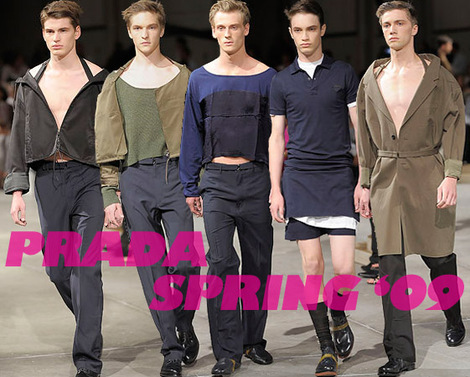 Here's Prada. Last season (or this Fall) they gave us halter vests and little pleated tutus for men. This time, it's the equally dubious contribution of waist cropped tops and open jackets suspended from straps to create a deep V portrait neckline, offering glimpses of various sections of a hairless torso. One doesn't have to think too hard to see the perils of such a look on the even slightly less toned and more hirsute. Evidently, jackets will be largely worn without shirts next year. It's always important to remember that what Prada sends down the catwalk is generally barely represented in even its own stores by the time the actual selling season rolls around. If you are wondering who is actually going to wear these clothes, don't bother. most of them will never be produced. 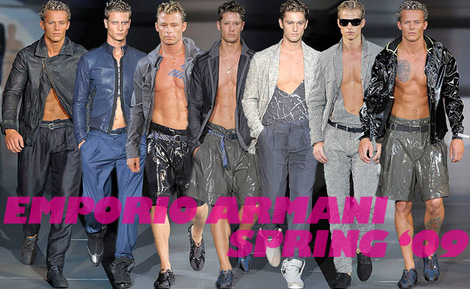 It is clearly the season of the Torso, and here's Emporio Armani, also implying that shirts will be thoroughly superfluous next year. 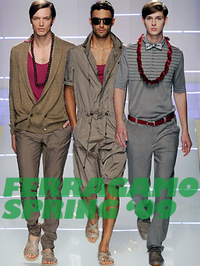 Thankfully Mr. Armani has kept to his tradition of using models who though waxed within an inch of their lives are at least old enough to drink legally and clearly know their way around a gym. Get to work on those crunches, because a flabby midsection will never look right with those shiny culottes everyone is sure to be sporting next year.
It seems that nobody is immune to the temptation to use silly runway accessories.
Even the usually understated and conservative Salvatore Ferragamo felt compelled to finish off their looks with strands of beads or braided velvet.
Not girly looking at all.
Oh, and then there's the jumpsuit in the middle there.
Always good to see what we won't be wearing next year.