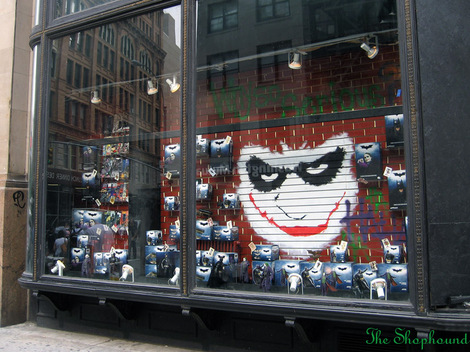 Marvel has had its moments this Summer with the surprise blockbuster performance of Iron Man and a successful reboot of the Hulk, but it's DC's turn to take over. What superhero fans are really waiting for is The Dark Knight, the continuation of Christopher Nolan's gritty take on The Batman and his rogue's gallery. We have never seen a viral, online marketing scheme as elaborate as the one that has accompanied this film.
As one of Manhattan's few comic stores with street level display windows, Forbidden Planet would have been foolish not to take advantage of the building anticipation for July 18th when the movie hits screens, and has devoted its prime, normally jumbled, Broadway window to the latest collectible figures from the upcoming film against a leering image of Heath Ledger's Joker with his new catchphrase, "Why so serious?" scrawled above. Considering how this film is being sold, look for some more unusual marketing initiatives to pop up around town during the next couple of weeks.
Forbidden Planet 840 Broadway at 13th Street, Union Square