Nike is Opening
On Mercer After All In  the dark conspiracy to make Bleecker Street ever less interesting, Eve Salon has posted its moving notice. The salon will close its current location at the end of September, making way for the previously announced Kate Spade shop. Earlier, we were unsure which of the two stores at 400 Bleecker would be moving. Unfortunately, we shouldn't read this as some sort of saving grace for The Biography Bookshop, the address's other tenant. While it has not yet been displaced by a designer interloper, its lease will be up in about a year, and while nothing official has been announced, the sort of untenable rent hike that has displaced most of the street's former longtime merchants is fully expected.
In an interesting twist, Eve will be moving to West 8th street, a popular but somewhat less charming shopping stretch that in the past couple of years has been relieved of many of its tackier stores. (does anyone really miss the redundantly named Man + Plus?). Are we hypocritical for suggesting that a mild gentrification could improve West 8th while an invasion of luxury brands has sucked all the charm from Bleecker?
We say no.
Let's face it. Most of the stores that were ejected from West 8th constituted a parade of jank, and if you are reading this, chances are you wouldn't have been caught dead shopping in them (Wet Seal? Bang Bang?). Since there still seems to be some empty space there, perhaps the folks at Biography Bookshop should be checking it out for their next home.
Quick before Kate Spade gets there.
Previously: Endangered Sites: Kate Spade Horning In On Bleecker Street
after the jump, the full notice... 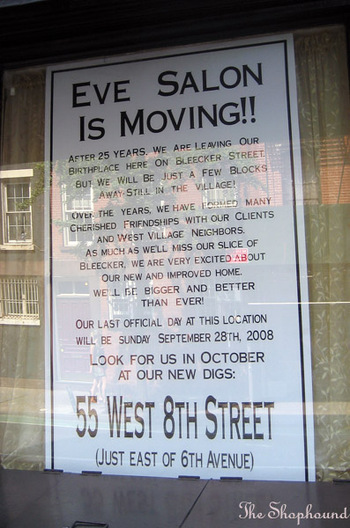