Rosa Chá Appears
In The Nick Of Time 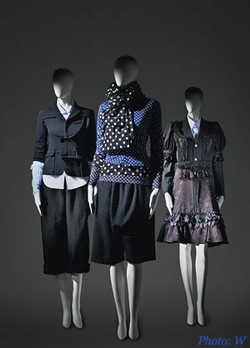 So far, W has the only advance look released of the hotly anticipated collaboration between Comme Des Garçons and H&M. Surely, the publicity floodgates will open soon, but we will have to satisfy ourselves with this glimpse for now.
It looks promising, and wearable, but definitely "Comme", though we really weren't expecting the kinds of avant-garde experimentation that characterizes designer Rei Kawakubo's main label.
Apparently, the folks at H&M left Kawakubo alone to do her own thing, which means there will be no children's line as previously announced mainly because she didn't want to do it.
Clearly, nobody pushes the queen of Japanese fashion around. W suggests that Kawakubo's independence occasionally made waves with the folks in Stockholm:

“What’s interesting about collaborations is the possibility for one plus one to equal three,” Kawakubo says, warming up to the topic. “It’s interesting for me to sell Comme des Garçons in places it’s never been sold before, to people who might not have heard of Comme des Garçons.” Not that she ever approaches such a project as a brainstorming or a meeting of the minds. It’s more the case of a willful designer making a strong proposition with a partner who brings something new to the table, like production know-how or distribution muscle.

In addition, only 20 major H&M stores (think Fifth Avenue & 52nd Street) will get the complete selection housed in a specially designed boutique, while other locations will get edited selections. We're expecting record crowds for this one. After all, if Viktor & Rolf could sell out at H&M, then Comme Des Garçons should be another blockbuster this November.
Comme And Go (W)