The Tents Are Back With Private
Shows And Designer Returns 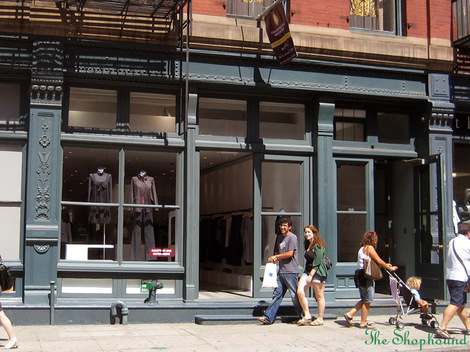 SoHo has been a hive of new store activity lately, (and we haven't even gotten to discussing the new Nike Store). The latest arrival is the French chain Comptoir des Cotonniers which opened its doors a few days ago, and is still receiving its first deliveries as you read this. It's an elegant, low key spot with a classic single-bar-along-the-walls layout and dressing rooms in the back. The goods have an easy sophistication and are reasonably well-priced, all bearing labels carefully denoting that they are designed in France, but as is common these days, made somewhere in Eastern Europe, or China. The brand prides itself on dressing many different generations of women, and the store offers a mix of classic pieces and more highly styled items that should sell easily in SoHo.
The real significance of Comptoir des Cotonniers is not just that it's another well priced European chain looking to enter the American market, but that its parent company is Tokyo's Fast Retailing Co. Ltd., also known as the parent company of Shophound obsession UNIQLO.
Comptoir, in contrast to its giant sibling a few blocks away, has chosen to go for a much more low-key opening strategy befitting its more upscale image. How it will fly in the U.S. depends a great deal on how more robust Americans respond to the French-scaled clothes, often a stumbling block for Gallic brands selling below the designer level here, and how the company makes accomodations for customers here.
In SoHo it's unlikely to be much of a problem.
Once you get to midwestern malls however...
Comptoir des Cotonniers 155 Spring Street between West Broadway and Wooster Street, SoHo