TOPSHOP.com To Get USA Makeover
In Advance Of Store Opening

Today In Trading Down: 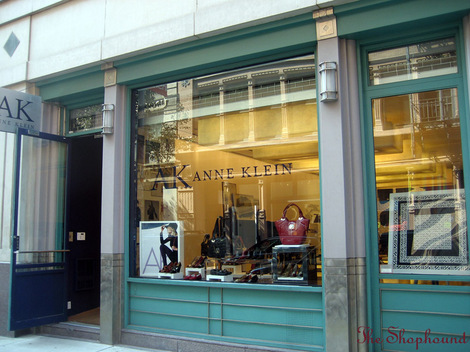 If The Shophound were in charge of what went on in the world, right about now, we would be eagerly anticipating Isabel Toledo's upcoming Anne Klein Collection show at Fashion Week. (Of course a few other things would be different too, like we would be King of Pretty Much Everything, but that's beside the point at hand.) 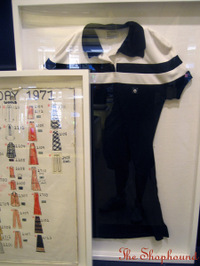 Of course, we will be going to no such show, because Jones Apparel Group, Anne Klein's parent company abruptly canceled the entire line last year after only two collections, relieving Toledo of her design duties, and dashing hopes that the once innovative label would be restored to its rightful place on fashion's A-List. Shortly thereafter, the company's Madison Avenue boutique which sold its bridge line, Anne Klein New York, was also closed after a barely a year, leaving us wondering what exactly Jones wanted to do with the brand.
Yesterday, we discovered Anne Klein's latest move, a shoe an accessory boutique in SoHo for its better priced division, AK Anne Klein.
They make a reasonably stylish if not particularly inspiring shoe for $79. It's a respectable look for Macy's opening price point, but we can't help wondering why the brand has chosen to showcase its lowest level mass-market department store line at a prime spot in SoHo? Was there nothing better to put in the store? Does the Anne Klein name have no meaning left for higher quality goods? 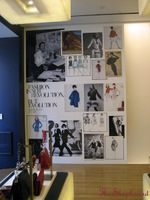 In a strangely perverse move, the shop has been decorated with original Anne Klein garments and sketches along with a wall full of vintage images, as if to say. "Our glory days are behind us." There you'll see advertising featuring faces like Andie MacDowell's and Paulina Porizkova's from the Louis Dell'Olio and Donna Karan days when the label was a designer sportswear mainstay, and that little square lion's head was coveted status symbol. (Click the images for a larger view)
It's sort of bewildering that the folks at Anne Klein are so eager to play up the label's rich design heritage, and yet refuse to offer merchandise that honors it. We suppose they have plan in mind over there, but their latest décor, while amusing in a nostalgic way, only points out how far the brand has fallen and does its current merchandise no favors.
AK Anne Klein 123 Wooster Street between Prince and Spring Streets

Posted at 04:14 AM in Accessories, Designer Boutiques, SoHo/NoLita | Permalink | Comments (2)

I loved that Lion's head. Oh my, thanks for reminding of that. I remember getting it on socks and belts, everything.

Love reading your site even though I am not in NYC. I do get up there fairly often and it'a great resource.

I believe the whole line is in serious trouble. The amount of designer turn-over in recent is sad. I fear JAG may be grasping desperatly for a wasy to keep the line...I work in an AK store and have just a few left before the doors are closed for good...