Today In Trading Down:

TOPSHOP.com To Get USA Makeover
In Advance Of Store Opening 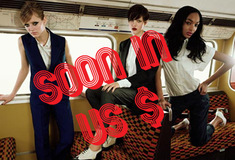 Topshop is getting ready for its big US opening with an online revamp to reel in its American customers.
Starting on September 9th, about a month in advance of the SoHo flagship opening, the Topshop and Topman websites will undergo an extensive redesign that will include selling merchandise in U.S. dollars.
Toss aside that calculator because those pesky exchange rate computations will be a thing of the past next month.
A special online section will be created where the staffs of the New York and London flagships will post advice to customers in a NYC vs. London competition.
In addition, special British-y items will be offered to US customers, including Jack the Ripper themed limited-edition T-shirts. After all, what's more British than a legendary, never caught serial killer?
That's all in addition  to the inevitable invasion of citywide promotional activity to prime New Yorkers for October's Grand Opening. Double decker buses are rumored to be involved.
Topshop rejigs sites ahead of US landing (Retail Week)