Surprise Move Of The Week:

A Paul Smith Outlet
For Williamsburg? 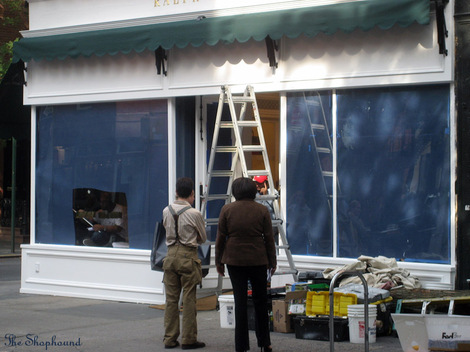 Ralph Lauren's speedy turnaround on Bleecker Street is a hair away from completion, while we have been

speculating for weeks about what would go into the store, now we have confirmation. The new, larger space at the corner of Bleecker and Perry Streets will house an expanded women's store, previously across the street. That explains the new, brightly whitewashed exterior, which matches its predecessor and contrasts with the black paint on his still tiny men's store next door.
Originally, we thought L'Uomo's former digs might become a showcase for his men's Purple and Black Labels, but really, doesn't it make the most business sense to expand the women's boutique?
Yes, it does, and now that it's no longer a cramped little stall, it will probably become a mint like Ralph's other Manhattan stores. 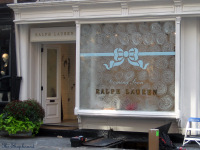 And does that mean the former women's space across the street will now become available?
Don't be silly. In a colonization plan that rivals his conquest of the block between 71st and 72nd Streets on Madison Avenue, Ralph is keeping the other space for another store concept which, judging by the baby blue bow on the window, is likely to be an infants and children's clothing shop.
That makes Ralph the champ on Bleecker with four separate shops on the street. Marc Jacobs is close on his heels with three shops (but still five total in the West Village), and James Perse hangs in third place with two.
The new women's store is currently crawling with PRL staffers clad in their instantly recognizable company wardrobes, scurrying to make sure that each display is placed just so. Look for it to be open by this weekend, if not before.