FIT Goes To The Dark Side
With A Gothic Show 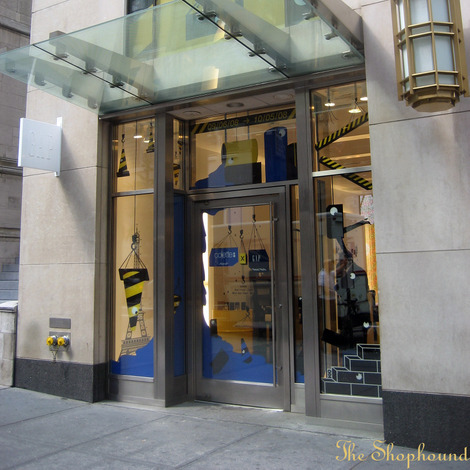 Sometimes we just can't make it to everything on the very first day. Such was the case with colette X GAP which opened just as we were in the midst of running around for Fashion Week.
Our feeling on this, however, is that if the pop-up store is supposed to be open until October 5th, it should be worth visiting at any time ...in theory, that is.
There was certainly no line Monday morning at around 11:30 AM when we made our way there, and inside the shop there were three salespeople conversing in French. Atmosphere? Perhaps they were colette employees specially imported from Paris.
Here's the thing: We have never actually been to the famous and revered colette in Paris, so we really have no comparison for this little hybrid version. Should that really matter? Shouldn't we be able to enjoy this shop on its own merits?
If that's the case, then we are a little underwhelmed. In fairness, we can't really review the store properly because so many of the special items appear to be sold out. The Longchamp Pliage bag in gray sweatshirt cloth is gone, and the supply of artist-designed t-shirts was decimated, though we were told that a replenishment was coming tomorrow. What was there included the trench coat customized by André, the jeans jackets customized by Olympia Le Tan and the Kangol hat and Repetto flats both in sweatshirt fabric. There were also a few pairs of Seavees sneakers left as well as various odds and ends.
Here's our problem. First of all, a lot of this stuff is much more expensive than normal Gap merchandise. One of the things we appreciate about UNIQLO's designer collaborations, for example, is that the prices are right in line with the rest of their stock. The Le Tan jackets clocked in at $350. Isn't the point of the Gap not spending $350 on a jeans jacket even if it is embellished with a decorative patch?
Look, we went in there expecting to be at least marginally impressed, but why would be get excited about a co-branded bottle of Kiehl's Crème de Corps that we can get pretty much anywhere these days? Lots of the novelty items were cute, but expensive, and without the context of the fabulous Paris store, maybe some of their meaning was lost. Some items just looked cheap, like the clear framed Oakley Frogskin sunglasses with a star print that looked like something Debbie Gibson might have thrown into a time capsule around 1988. They weren't cute. They were cutesy, and not so cheap at around $144. Perhaps we would have been more impressed if we had more appreciation for Hello Kitty, which was also represented.
So call us cranky, but it wasn't until we went next door to the newly remodeled Gap flagship that we actually found things we wanted to buy.
colette X GAP Fifth Avenue at 54th Street, Midtown, through October 5th.

some of this stuff always feels like its trying to hard, with very little style or substance. Reminds me of the story of the emperor with no clothes.