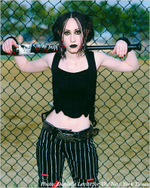 À propos of FIT's latest exhibition,"Gothic: Dark Glamour", leading Critical Shopper Cintra Wilson stays out of the shops and hits the Facebook to chat with today's Goth teens in today's Thursday Styles.
She also talks with the exhibition's curator, Valerie Steele, who adds historical context, but the most interesting aspect of the article is La Cintra's disclosure that she was once a Goth girl herself (no, that's not her in the picture).

Secretly I nursed grandiose ideas that my funereal vintage attire aligned me with beatniks, existentialists, Zen Buddhists, French Situationists, 1930s movie stars and samurai. (In reality, my style could probably have been more aptly described as “Biker Madonna with mood disorder.”)

Actually, Goth is not so far removed from Wilson's current chic, sleek femme fatale style, so it's not much of a surprise. In fact, we bet she made quite the alluring little Bay Area Vampirella at the dawn of the '90s.
And, see, she turned out OK.
You Just Can't Kill It by Cintra Wilson (NYTimes)
Previously, Costume Exhibition Du Jour: FIT Goes To The Dark Side With A Gothic Show