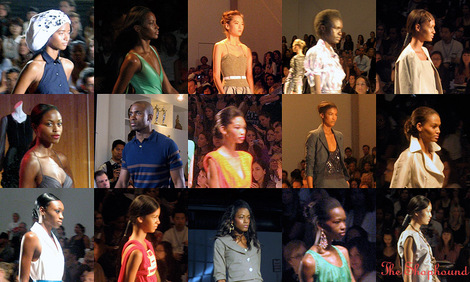 One of the things we were most interested to see this past Fashion Week was whether or not July's Italian Vogue "Black Issue" would have an effect on the runways. It seems to have...a little bit.
At the end of every runway show post we added a "Diversity Quotient". A few people noticed, like our friends at "The Cut" from New York Magazine. We didn't want to harangue anyone about it, but we now feel that given the recent homogeneity on the runways here and in Europe, the racial makeup of the models in a show is significant.
Models, and how they perform are a more important part of the Fashion Week experience than most designers would care to admit. Anyone who has experienced even a few of the Supermodel-packed runway shows of the '90s, knows that rather than distracting from the clothes, charismatic models really bring them to life, and frankly, we miss them. Naturally, designers want the focus to be on the clothes, but a few months ago, Italian Vogue reminded everyone that Black models have sadly diminished in visibility in recent years, especially compared to the heydays of Givenchy and Yves Saint Laurent who reliably filled their catwalks with them in the 1970s and 80s. The lack of diversity is starting to reflect poorly on designers, who are typically slow to receive criticism from the public and are still smarting from the beating they have been taking over excessively skinny models.
So we decided to keep count.
And how did we come up with this "Quotient"? We averaged the percentage of minority models in a show's cast and the number of times they appeared on the runway. Originally, we were going to go on Style.com and keep track of every show, but really, who has time for that?
Well, not us.
We settled for just counting most of the shows we went to, so our statistics are more of a snapshot of our experience than a definitive survey. In one or two cases, commenters corrected us when we missed a model, which we appreciated. We counted Black, Asian and, for the occasional appearance of Lakshmi Menon, Indian or South Asian, if you will (so far as we could tell, she was the only model we saw who fell into that ethnic category).
Have things really improved? We generally saw two or three black models per show this season as opposed to just one in previous seasons. We will know better if things are changing after Milan and, most importantly, Paris. It's worth noting that two of the models getting the most attention this season were Black: Dominican born Arlenis Sosa, who arrived in New York with a brand new Lancôme contract, and Sessilee Lopez, one of our favorites, who emerged a few years ago, but whose career never took off, that is until Italian Vogue gave her a huge feature in July.
Like many, we would rather this were a non-issue, but visibility is still important in our media culture, especially in an industry like fashion which is responsible for such an abundance of powerful imagery.
For us, it's back to our usual shopping, but before we go, here's a compilation of our unofficial results, and we hope the conversation continues.

Thanks so much for making this info available. I've shopped extensively at Jill Stuart (full price) and Phi (sale). I am also an African American female. This info is very helpful.