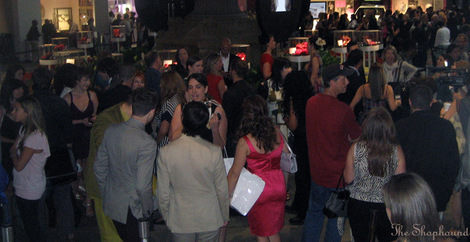 We are in the tents this morning to watch the Project Runway Finale on the monitors. Things are starting to quiet down here, as the only other big tent shows today, Badgley Mischka and Chado Ralph Rucci are not until this afternoon. After the show, the lobby becomes sort of a little party for current and former contestants who cluster about the exit. Clearly the star here is Tim Gunn, who, though less of a ubiquitous presence at the shows this season, posed endlessly and patiently with fans and contestants' family members after the show, or should we say six shows. PR has to stage a runway show for every contestant not yet eliminated on the air, so while we won't spoil anything specific for you, we can say that out of Korto, Jerell, Kenley, Suede, Leanne and Joe, three shows looked finalist worthy, one was a disaster, and the other two were passable but either predictable or simply tacky despite what looked like excellent finishing and workmanship. 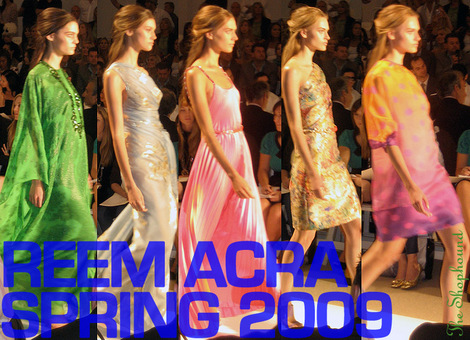 As for the rest of yesterday's shows. What we remember most about Reem Acra's show was the deafening music. We have been to many shows in the Promenade tent, and a even seen a few from the exact same seat,  but not once have we had our eardrums so nauseatingly blasted like they were at that show, 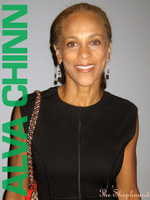 which is wildly out of character for the generally refined and elegant Ms. Acra. It was a shame to distract from her collection which was full of the rich embroidery and striking color that her fans have come to expect, including a convincing case for reviving caftans. Next season, we hope she can find music that complements her work more appropriately.
Our head was still throbbing a couple of hours later when we went to see Chris Han's show, but we were glad to say hello to one of our favorite veteran models, the gracious Alva Chinn, an original Halstonette who was featured in Italian Vogue's recent Black Issue.
Han's show turned out to be lovely, as she managed to make the ethereal look that has pervaded so many shows look more pulled together instead of flying off into Stevie Nicks fairyland as so many other designers have. 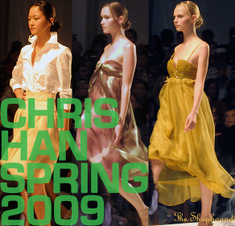 Funny, the music at Reem didn't strike me as more ear-splitting than usual. Maybe something (or someone?) was blocking it a bit where I was sitting.