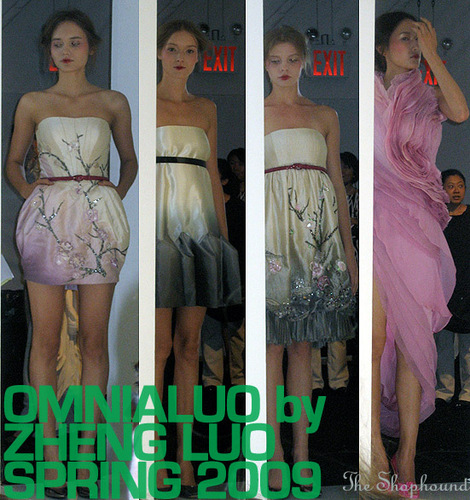 Well, it's all over until January.
We tried to make Fashion Week as painless as possible this year, so we limited the number of shows we attended, and tried to see very few that we didn't have invitations to. that meant not hanging around the tents all day watching shows on the monitors, and it also meant that we didn't get backed up trying to write something about 35 or so fashion shows, some of which are bound to be thoroughly unmemorable. We wound up actually skipping a few shows, and in the end it was probably easier on us and you.
Friday's schedule was pretty light. We didn't have to go to the tents at all in the morning, but we couldn't pass up the opportunity to check out Project Runway's Finale runway show even if it was just on the monitors. Then we were free until 5 PM when we had to choose between Rad Hourani on Mulberry Street and Something called Omnialuo by Zheng Lou in the tents. Normally we would have gone with Hourani, but it was raining for one thing, and if we went to the tents, where we knew we had a seat assignment, another plus. In addition, we could at least watch Chado Ralph Rucci on the monitors afterward. 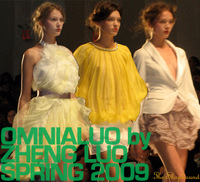 Omnialuo is a Chinese designer label making its U.S. début, which can always be a dicey proposition, but the show, which opened with an elaborate video projection, turned out to be a lovely surprise. Even the cherry blossom motifs, which can often wind up looking a bit stereotypically "Oriental" were beautifully executed. The crowd, hardly A-list but enthusiastic nonetheless, found itself applauding individual outfits including a trio of fantasy gowns that closed the show in a shower of pink petals. Was it over the top? Perhaps a bit, but at the end of a very safe show season, over the top can be refreshing. We can't tell if Omnialuo will make any inroads with American retailers, but it shows promise. Our seat wasn't the best location to get regular runway shots, but we got great shots of the models a moment before they got on the runway, which we love.
While we waited for Chado, we watched the sponsor booths beginning to pack it in. We can't say that we ever made it to the CFDA's Health Initiative booth, nor did it look like anyone else much did. Sandwiched between the Havaianas free for all and Blackberry & T-Mobile's daily giveaway, it looked a little forlorn.
Usually Ralph Rucci has little extra room at his show, but as we saw the entire standing group ushered in early, we thought we might have a shot, and to our delight we found ourselves dashing into the big tent at the last minute. Unfortunately, we weren't in a position to take pictures, but we were glad to get in for once. Rucci was showing under the aegis of "American Express Presents", and he wasn't originally on the schedule at all. He has been threatening to move his shows to Europe permanently, partly because of what he felt had become an increasingly tasteless atmosphere in the tents, and showed in Paris last season. Having already lost Rick Owens to Paris, we suspect that some influential folks have convinced him to stay. This was another show where people applauded individual looks, but this time it was very much an A-list crowd including loyal (and wealthy retail-paying) fans like Martha Stewart, and Rucci is something of a virtuoso who has assumed the position in the industry once held by masters retired or passed like Galanos, Geoffrey Beene and Halston. As he took his bow, Rucci got the Standing O, which is a lot rarer at a top runway show that it is on Broadway
THE RUNDOWN
OMNIALUO by ZHENG LUO
MODELS:
Diversity Quotient: This one was tough to calculate since we didn't have such god photos and there wasn't very much web coverage, but there was at least one Black model and several Asian ones. It was a Chinese designer after all.
CELEBRITIES: Celebrities? for Omnialuo who?
SWAG: A white fan, which would have come in handy a steamy week ago should we have wanted to risk a Karl Lagerfeld impression.
CHADO RALPH RUCCI
MODELS:
Diversity Quotient: 15% (approx.)
4 Black models in 6 looks total including Yasmin Warsame. Where's she been all week?
CELEBRITIES: The aforementioned Ms. Stewart & Amy Fine Collins. Rucci eschews chasing Hollywood.