Topshop Gets A New Outfit

The Costume Institute Focuses
On Models For 2009 Sometimes The Shophound gets so focused on new stores and openings, that we neglect our old favorites, who still remain pretty remarkable. New York has more than its share of unique emporiums, and high on the list is ABC Carpet & Home. 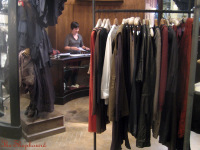 We hadn't stepped into ABC for a little while before yesterday, but we are suddenly in the market for a new rug. Though we only perused a few floors, we spent at least an hour on what was barely a cursory survey of our favorite sections. There is a lot there to see, even for a big New York flagship.
In many areas, the main floor in particular, ABC seems pieced together from a series of carefully chosen leased and licensed departments. Because of this, there is a regularly shifting lineup of vendors as new shops come in and underperforming sections are eliminated. The main floor continues to be a prime destination for gift shopping with a range of merchandise running from jewelry to books to tabletop items to paisley jacquard shawls and other Asian imports. Shopping the floor, we even spotted actress Keri Russell, with whom we are now officially obsessed after having seen "Waitress" about four times last month on cable. We can report that she looks just as pretty in jeans as she does in a Nina Ricci ballgown at the Oscars. And that's extremely pretty. 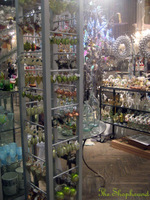 One of the things that lured us in was a new boutique for designer Gary Graham. ABC sells very little apparel, but Graham's inventively designed sportswear meshes perfectly with the sophisticated vintage/modern/embellished aesthetic in effect on the main floor. While Graham's line isn't cheap, it doesn't quite hit the stratospheric price levels of, Rick Owens, for example, to whom he can be favorable compared.
Even ABC's Holiday shop bears few traces of the typical green, red and gold, and the center of the floor was given over to a display of Native American or possibly Central American ethic costumes.

A few floors up we found another of our favorite sections, Bed & Bath. Here, ABC has improved the floor by jettisoning less exclusive labels like Ralph Lauren in favor of expanding space for its impressive roster of imported linens like Pratesi, Frette, Yves Delorme, Matteo and a host of others. Once cluttered, the display beds piled with sumptuous, zillion thread count jacquards now have more room to breathe, offering an even more seductive shopping experience.
ABC comes under the usual fire for being overly opulent and occasionally pricing some items a bit higher than necessary. In fact, the savvy shopper may occasionally find some of the same items in other stores for slightly lower prices. The store's strength, however remains not the individual bargain (although clearance sales there are always worth visiting) but the incredibly well merchandised offerings, both broad and deep spread over nearly eight acres of selling space. Furniture and home accessories can occasionally overshadow ABC's original business, carpets, which run from handmade Oriental silks to a full selection of broadloom across the street in the annex which still includes bargain basement full of rugs and carpeting.
Not unlike, Barneys New York, ABC is a decades old New York mainstay that, over generations of family ownership, has evolved from humble beginnings to a major luxury landmark. It's the sense of surprise and constantly changing merchandise mix that keeps us coming back, and in this respect, ABC consistently delivers.
ABC Carpet & Home 881 & 888 Broadway at 19th Street, Flatiron District