Den Converts To An Odin Outlet
...Get It While It Lasts

A Retail Legend Bows Out: 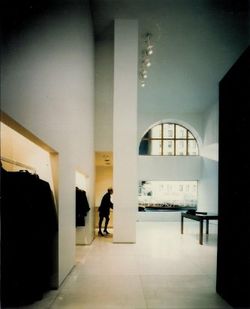 We have been trying to stay as upbeat as possible in our reporting on the comings and goings of stores, but to be honest, these days there just seem to be more goings than comings. The latest news comes from WWD, and it hurts to hear that one of the city's most innovative and influential retailers is retreating home. Linda Dresner will close her eponymous boutique on Park Avenue at the end of December. Her original Michigan store will remain open. Her lease is coming to an end, and, astonishingly, her landlord wanted to increase her rent in this economic climate. Reportedly, her rent is around the $500,000 mark for 34,000 square feet at 59th Street and Park Avenue.
Dresner was known for her minimalist boutique that influenced store design for the end of the 20th Century as well as a sharp eye for unknown desigers who would go on to become major players like John Galliano, Comme des Garçons and most notably, Jil Sander. Her store was the last luxury women's boutique on a short stretch of Park Avenue that once included legendary shops like Martha and Sara Fredericks. Dresner represented a more modern, updated version of that salon style of retailing. She notes that it became much harder for her store to remain exclusive and special among the vast proliferation of designer stores in New York which will be less of a problem in her hometown of Bormingham, Michigan. "The audience that likes these clothes is large, but it’s not huge in Michigan," the retailer tells WWD, "We still have a strong signature. We can cope with the ups and downs easier in Michigan.”
In fact, it is to Michigan that her excess inventory will be sent after next month, so don't wait around for an "Everything Must Go!" liquidation sale, though Dresner is offering deep discounts like every other retailer at the moment.
The good news is that Dresner has not ruled out a return to New York if conditions improve and an appropriate location can be found. For now, however, we will have to bid adieu to a small but essential part of the city's retail family.
Dresner Checks Out: Park Ave. Retail Icon Succumbs to Economy (WWD)

that's terrible. always had the best buys. will she be having an inventory sale?