7 For All Mankind
Replaces Miguelina On Bleecker

Employee Of The Week:

One Less Chocolate Store
For The Upper West Side 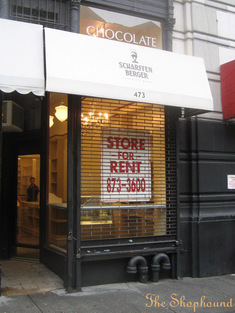 This is an image we are afraid we may see a lot of in the coming months. The store we thought was thriving suddenly ups and leaves, with a big "For Rent" sign left in its place.
There are plenty of likely candidates we can think of, but we wouldn't want to tempt fate, or wish ill on anyone's struggling business. We wouldn't, however, have put the modest Scharffen Berger chocolate boutique on that list.
After all, how could a premium chocolate shop fail in the heart of the foodie saturated Upper West Side? We would think that home-bakers would be enough to keep the place going, and its location on relatively modest Amsterdam Avenue at 83rd Street wouldn't initially seem like a terribly high overhead.
But there it is, empty and waiting for a new tenant, before the weather has even gotten cold enough for hot chocolate season.
Now that we have discovered that Scharffen Berger's parent company is none other than the giant Hershey Company, we are even more dismayed that the relatively low key shop could have kept going for a little longer.
Maybe it was too innocuous and neighborhood-ish of a location. Perhaps we can hope they will pop up somewhere else with a higher profile.
We don't like to see chocolate just up and leave like that.