One Less Chocolate Store
For The Upper West Side

Is This Really Necessary?

Employee Of The Week: 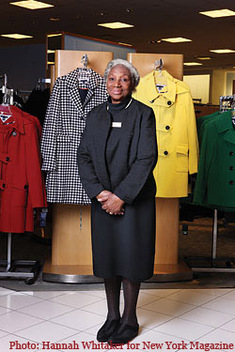 New York Magazine has quietly resurrected one of our favorite features: Ask A Shop Clerk.
Once a weekly treat, the shop clerk slowed down to a monthly, and then disappeared altogether for a while, but has been popping up here and there over the past few months.
This week, our heart goes out to Ms. Veronica Leslie who has been working at Macy's since 1960 when she was paid forty-six dollars a week at the Flatbush branch for what was supposed to be a temporary position. That's since before The Shophound was born (and by that we mean the person, not the blog).
God bless her, she's still standing, and we hope they treat her like a queen because she surely deserves it for all those decades on her feet.
Now in the Coat Department at Herald Square, Ms. Leslie has absorbed the expertise of a pro:

Any plans to retire?
I’m thinking about it. I’ll reach my 50th anniversary in two more years. By that time, the younger generation will be able to take over for me, keeping in mind what I’ve taught them.
Like what?
You have to know how to ask the customer to try on another size. Sometimes someone thinks she’s a size 10 but really she’s a 12. Younger people like to wear their coats so tight now, but if you get on a bus and have to reach for the rail, you’re in trouble—your sleeves will burst.

Truly, there's nobody we would rather buy a coat from in Macy's than Ms. Leslie. Frankly, there's probably nobody else we would rather buy anything from in Macy's.
We do think it's rather optimistic of her to think that in only a couple of years, the younger generation of Macy's staff will finally be ready to take over for her. If they haven't learned her lessons by now (and we're pretty sure they haven't) they probably never will.
We strongly suggest that Macy's try to hang on to her at all costs, but we doubt they will. Ms. Leslie informs us that the store is celebrating its big 150th anniversary by treating the staff to cupcakes.
150th anniversary.
Cupcakes.
Ask A Shop Clerk: Veronica Leslie of Macy's (NYMag)