Ralph Lauren Redesigns The Pedicab
For His New Bleecker Store

L'UOMO Is Reborn As Michael
On West 4th & Adds Womens 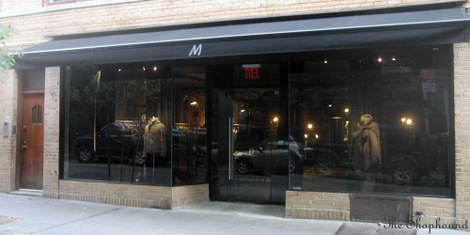 When L'UOMO was turned out of its longtime home on Bleecker Street, it was heartening to know that the boutique had a new space already lined up on West 4th Street.
We walked in yesterday afternoon, and immediately recognized the familiar moody lighting, stripped down brick walls and well chosen collection of Italian sportswear from labels like Stone Island and CP Company. As usual, there was a stellar assortment of outerwear from the likes of Moncler and Belstaff and to our right was the women's section with....wait a minute.
What store is this?
It turns out that the folks behind L'UOMO have taken the opportunity to broaden their focus now that they have a good bit more space.
But what of the name? Doesn't l'oumo mean "the man" in Italian? The new store is called Michael, we were told, which is signified by a solitary, subtle "M" at the edge of the awning.
On the women's side of the store, things have gone in a slightly more adventurous direction with Vivienne Westwood's Anglomania and Rick Owens' less expensive Lilies collection as well as many less familiar labels that fit right in with that offbeat yet sexy aesthetic.
While it's always a shame to lose a location as well placed as L'UOMO's old corner shop, the store never could have expanded this way in the old space, so the forced move may turn out to be something of a blessing. Michael is a bit off the beaten track -away from the cupcake lines -but full of rewards for those who seek it out.
Michael 271 West 4th Street between Perry & West 11th Streets, West Village
Previously: Same Old Bleecker Story: L'Uomo Ousted. Ralph to Move In