WWD Has The First
Look At McQ for Target

Ralph Lauren Redesigns The Pedicab
For His New Bleecker Store UNIQLO could hardly have chosen a better day to stage its most elaborate promotion yet. What could improve on an unseasonably cold November morning when it's time to give away free pieces of the new Heattech thermal clothing line?
UNIQLO has become obsessed with automation lately from the UT T-shirt vending machines in Japan to the Wakamaru sales robot in the SoHo store. This morning they set up a "human vending machine" on Times Square's Military Island to distribute free clothing until 1 PM, upstaging the Army recruiting pavilion. 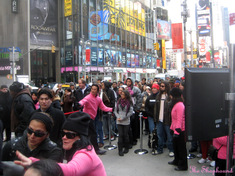 It wasn't so much a "machine" as it was a large prop with smiling workers inside who dispensed free clothes with robotic movements. In addition, one staffer also wielded a heatscanner which would identify the coldest parts of the body.
OK, it was a little hoaky, but that didn't stop people from lining up hours before the event began to get a shot at some of the free clothes. The crowd was a mixed bag ranging from curious tourists to some of Times Square's regular...uh...habitués who, when the event started at 10AM sharp, were exceedingly vocal about reminding the silver clad UNIQLO representatives that they were first in line and they wanted their free gifts. 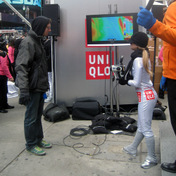 Well, we can't all be genteel and gracious when it comes to free giveaways.
Most of the crowd skipped the heatscanning and went straight for the vending machine, and as we all know a crowd of people in the middle of Manhattan will only lead to a bigger crowd as people stop to see what the fuss is about.
We hightailed it out of there before things got too hectic, and scored a striped, long sleeved t-shirt ($15.50) which fit well, and had a comfortably dry hand, especially for something made of acrylic, polyester, rayon and spandex. Heattech is made from specially designed hollow fiber threads that convert body moisture into heat, providing thin, lightweight insulation. UNIQLO tells us that it is worn by one in every three Japanese. If this winter is going to be as cold as we think it is, then we will be making our way down to UNIQLO in SoHo for a matching pair of long johns.
UNIQLO (Official U.S. Site)
after the jump, a few more pictures 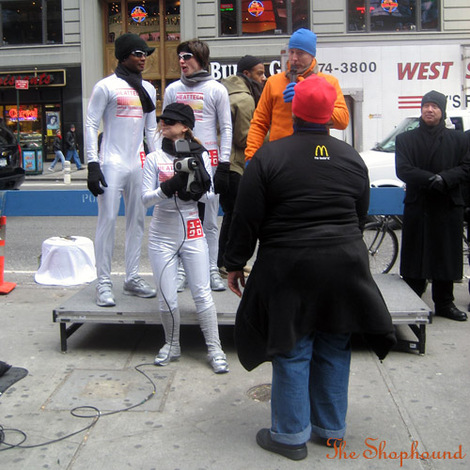 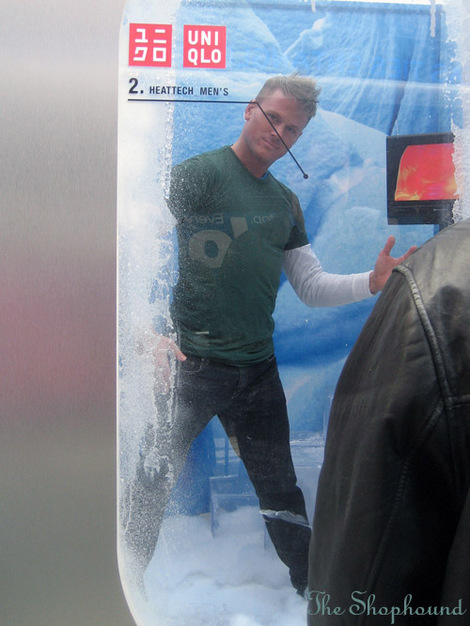 hey I was the brunette vending machine girl...anyway you have any pictures of me there? I love to have a copy!! Thanks!

Hi, It's the second time i'm posting you without a reply. I found your site using Yaehoo, does your site support firefox?