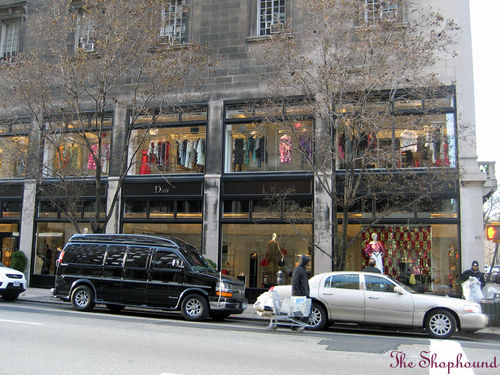 Let's look on the bright side, for a moment..
Christian Dior has wasted little time in converting the former Gianfranco Ferre boutique at Madison and 71st Street into a bright new shop for itself. It's a refreshing act of optimism, and the colorful, extravagant resort collection in the window does its best to dispel the doom and gloom currently plaguing designers and retailers. Had they a silver ball, the folks at Dior might have held off opening a second two-level shop in Manhattan, but since they committed to the second location. they are making the best of it, and if there's anywhere it will succeed, it's Madison Avenue.

Nanette Lepore is also looking ahead with confidence and continues work on her upcoming new store to open at 958 Madison between 75th and 76th Streets. Perhaps now is the moment for a few lower priced labels to return to a street that has become topheavy with opulence.
It's hard to escape the general nervousness in Manhattan boutiques right now, however, as retailers dread the bloodbath their profit margins are taking from the current round of deep discounts clearing their bloated inventories.
A walk down Madison Avenue this afternoon lacked the crowds of enthusiastic Holiday shoppers that one would reasonably to see at any time at this point in December, and there is the disappointment of seeing what was thought to be healthy boutiques suddenly shuttered. The latest quick exits belong to Allegra Hicks and Alessandro Dell'Acqua, with Sergio Rossi soon to follow

Hicks' closure was surely a result of her company's recent sojourn into Administration, the British version of Chapter 11 Bankruptcy. Luckily, her brand found a willing buyer, but not in time to save its Madison Avenue boutique which opened only a year and a half ago.
More empty space was left by Dell'Acqua, whose brand is apparently still up and running, but whose shop ran a fast "Everything Must Go" sale last week culminating in a store fixture sale over the weekend covering every item down to the last paperclip. In fact, all that remains is a final note in the window to a customer. Kenneth, Call Sarah about your table. 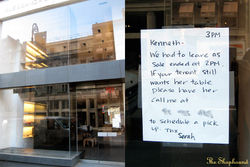 Lastly, Sergio Rossi, a division of the Gucci Group, is closing all of its company owned U.S. retail stores by the end of the year. This follows a huge sample sale last week which had customers wondering about the fate of the exclusive brand. Rossi remains in business, but will instead focus on building its volume through its wholesale accounts.
We are willing to bet that this is the wave of the future for many sub-mega brands who only a few months ago were eager to promote their brands with lavish signature boutiques, and are now saddled with high-overhead generating retail stores.
On the plus side, this potential trend may benefit the currently flummoxed multi-brand department stores like Saks and Bloomingdale's, who may probably have to compete less with their vendors' own flagship boutiques only a few blocks away.
A few doors close, but perhaps a few other will ultimately benefit.
Hey, we're trying to think positively here.
Breaking: Sergio Rossi to Close All Stores in United States by Early 2009 (The Cut)
Previously, Today In Switcheroos: Ferré Comes Full Circle, Sells Madison Avenue Lease To Dior, Allegra Hicks Finds an Upper East Side Home on Madison