Too Much Too Soon:

Kira Plastinina On The Rocks? 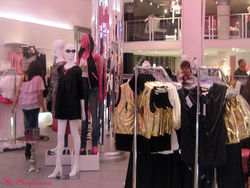 Over the weekend we (and we're betting several other fashion themed websites) got an anonymous comment, and then an email (now unpublished) about Russian wonder-teen retail chain Kira Plastinina. According to the comment —which we at the time we felt was unsubstantiated and not to be remotely taken as fact— The chain's U.S. operation (consisting of 12 stores) is teetering on the edge of bankruptcy.
at the time, we didn't think it was solid enough even for a blog to publish. We generally don't trust anonymous, negative tips because frequently it's just someone who is trying to spread malicious rumors, but now WWD has confirmed that the nascent chain is indeed in trouble.

Difficulties were pegged to the declining fortunes of Plastinina’s father, Sergei Plastinin, a tycoon in the dairy and fruit business in Russia, who bankrolled the U.S. rollout and was heavily invested in the Russian stock market. Shortcomings in how the chain was operated and the impact of the recession in the U.S. were also cited.

Well, we did think that they were coming on a little strong. Apparently, rent is up to date on the stores,  only some of which may close, but it looks like Kira Plastinina's moment will have been exceedingly brief.
Kira Plastinina U.S. Stores Face Closure (WWD)
The text of the mysterious email after the jump.
Previously: Kira Plastinina: Even Pinker Than We Thought

Hi, im trying to contact you but the link is broken. i think its important that you make a piece about the entire kira plastinina brand going completely bankrupt in the us. They are trying to keep it a secret, but really they never paid their construction workers for their work on their stores (they had protests) they notified their employees with less than a weeks notice that the store will close down. the entire thing is sketchy, all the media she ever got was paid for by her dad. (2 million dollars for paris to come to a show, all the teen vogue "pieces" were just advertisements made to look like part of the magazine) now they are trying to exit quietly, but they really blew it.

kira plastinina has gone bankrupt in the usa, the stores will close on friday and they are trying to keep quiet not let people know everything is 70% off but not advertised!  they have 4 mechanics liens filed against them, protestors of construction workers who never got paid, their manniquiens are on ebay... please! explore this her father paid for all her good press, and is making sure this stays out of the lime light to not ruin a possibly bloomingdales line!

Posted at 08:35 AM in Chains, Disturbing Developments | Permalink | Comments (4)

I am very bitter about how our US team was treated throughout this whole ordeal. We all worked hard and believed in the company but knew that it would all end in tears....

I was a manager at one of the Kira Plastinina shops and am so disgusted with how the company went about with everything. There was so much discrimination,people who werent paid, frustrations and scandals. Its crazy to think a company could away with so much. We were given less than a weeks notice about our jobs being let go..some people werent given anything and just fired on the spot with NO reasons or explanations.We are at the point where we are getting kicked out of our locations,no rent has ever been paid, no electric bills have been paid and all our vendors will go bankupt if the company doesnt find a way to pay them which im sure they wont. Our russian head Director is in the usa and is going around to locations and taking the merchandise with her husband and computers etc. Its nuts we are so astounded. We are at the point where we are fighting for our paychecks. We all believe this was a cover up for some kind of dirty work or drug deal..something.But this company has been nothing but savage to us. They caused us soo much stress and pain its unreal.Lawsuits are crazy and all of us were so mistreated. We worked SOO SOO hard for nothing. They just slapped us in the face.

This was my daughter's favorite store in Stamford, CT. I received an email on December 20th saying store was closing, everything was 70 percent off. By the next morning when I went to the store it was locked and permanently closed. It's fishy because they sent out the emails and then closed the store. Usually companies want to liquidate the items and sell as much as possible. In looking inside the store the racks were full of merchandise, yet the store was closed. Other customers were shocked and disgusted when they tried to enter the store...what a shame!

This company was utter bullshit. As a senior employee of the corporate office I can confidently confirm that The Russians treated the American staff like crap. No one was paid severance and most employees never recouped expenses. ONE WEEK before filing chapter 11 Nicole Ritchie was paid $150,000 to fly to Russia for the launch of Kirs'a 'high end' line. What a joke.

For the extent of the company's existence the Russians never once listened to the incredibly talented team of staff they hired. They felt it more important to pour millions onto lame PR stunts than to make clothes people actually wanted to buy.

They insisted on renting shop fronts in the tackiest, most high rent locations, where the line's low price points NEVER had a chance of covering the insane monthly overheads.