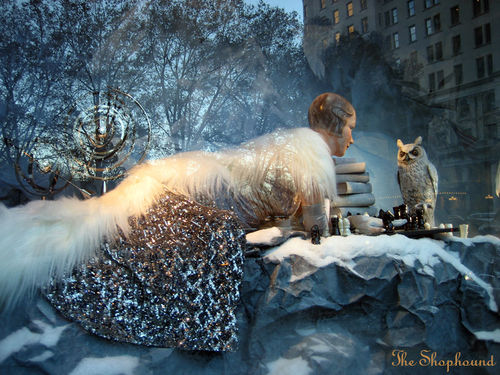 Everyone needs a little Holiday escapism, and this year, Bergdorf Goodman has once again more than lived up to its reputation for having the most lavish Christmas windows. This season, the store's big five Fifth Avenue windows are devoted to fanciful interpretations of the Four Seasons, or the Four Seasons plus one extra season. 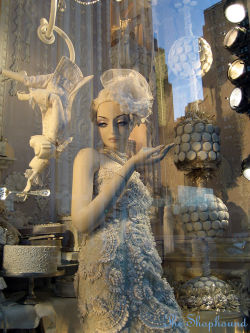 All the familiar elements are there like unabashedly sumptuous theatrical settings stuffed with items, some for sale, others not. As usual, there are always a couple of human mannequins with animal heads as well as a liberal use of taxidermy specimens. Of course there's also some clothes including Eva Longoria's beaded fringe Marchesa Emmy awards dress among other opulent outfits.
After last year's kaleidoscopic tribute to designer Tony Duquette, the palate has now been limited to snowy silvers and grays with flashes of gold for good measure, and while the Fifth Avenue windows are the showpieces, the palette extends to all the other windows with those on the 58th street side reflecting the image of the recent would-be competitor, the Plaza Hotel.
Like a new take on a favorite Christmas cookie, Bergdorf's windows are always a welcome treat. Who could resist a window featuring shrubbery made from macaroons? Well, not us, and since foot traffic on Fifth Avenue is appreciably lighter this year, there are far fewer crowds to push through to get there. The other added plus? The deep, early clearance reductions waiting for you should you dare to enter the store. 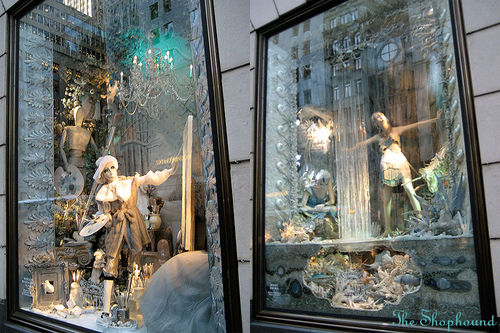 You'll find more of our shots after the jump. Be sure to click the images for a larger view in another window. Bergforf's own full-on shots of the main windows can be found on their website HERE.
Bergdorf Goodman 754 Fifth Avenue between 57th & 58th Streets, Midtown