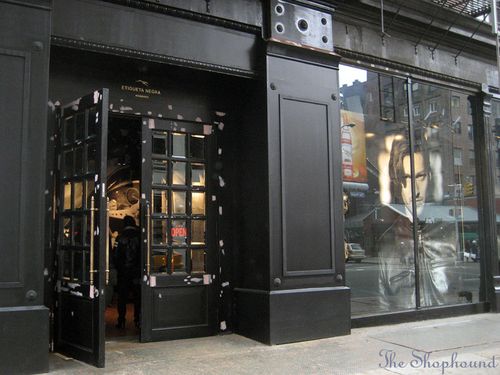 On Christmas Day, The Shophound happened to find ourself talking to a person from Argentina, so we asked if he was familiar with Etiqueta Negra, the chain poised to enter the U.S. market. "It's kind of like an Argentinean Tom Ford," we were told, "very expensive and luxurious.". Of course, at the time we were unaware that it had quietly opened its doors a few days earlier on Lafayette Street in one of the spaces left behind by Otto Tootsi Plohound. 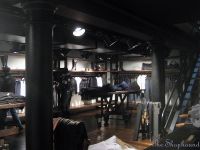 Still waiting for some final touches, the store has been dramatically transformed from its previous contemporary incarnation. In keeping with the building's vintage exterior, a rough hewn wooden floor has been installed to set off an interior designed to look as if it had been there from the beginning. Shelves are piled with antique luggage and other weathered curios. If this sounds a little familiar, the design concept does recall Ralph Lauren's sturdy template, though the shadowy lighting is more of a Ford touch. This is not to say that the store is an imitation. If Lauren's stores are given to a feeling of precious, studied clutter, Etiqueta Negra is large enough to feel expansive, if a bit dark, moody and rugged like a former factory or a stable. 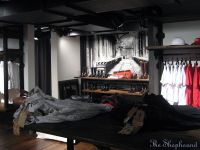 As for the clothes, they are sleek and classic suits and luxury sportswear including an assortment of supple leather jackets and chunky knits. Since Argentina's seasons are the reverse of those here, it's hard to tell if the Spring 2009 collection we see in the store is specifically meant for warm or cold weather (if not both), though seasonal deliveries have become so accelerated lately that we wonder if it even matters much anymore.
Downstairs, things are geared more towards Polo, which in Argentina is much more of an equestrian sport than a designer label. Despite presence of the word "Hombres" over the door, there is a similarly urbane women's collection found downstairs as well.
It's a pretty good guess that the folks at Etiqueta Negra were expecting a somewhat more hospitable retail environment when they were planning their lavish U.S. début, but it was encouraging to see that on an unusually quiet day after Christmas, the new store was attracting interested customers who left with filled shopping bags. After a joyless Holiday shopping season, there may be some hope for the future after all.
Etiqueta Negra 273 Lafayette Street between Houston & Prince Streets
Previously: Upcoming International Arrivals: Argentina Sends Etiqueta Negra To Lafayette Street