Atelier Moves Into The Light
...Sort Of 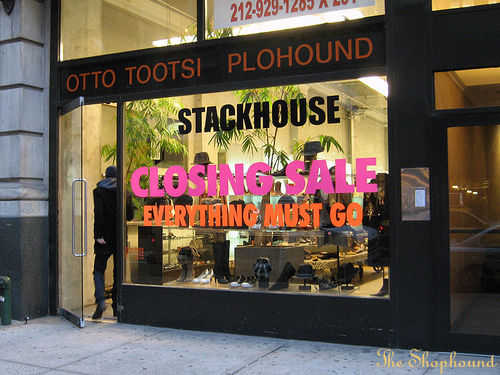 It's not an easy time to be The Shophound with so many promising stores abruptly closing. Sometimes it seems we are covering more goings than comings.
Then there are stores like Otto Tootsi Plohound, which has been dead to us for years. We already eulogized the once trendsetting shoe store earlier this year when its large SoHo location closed to make way for Argentina's Etiqueta Negra, but now its final location on Lower Fifth Avenue is set to be shuttered. To say the retailer had seen better days is an understatement. Those familiar with its current schlockhouse state would never recognize that it was once one of the city's trendiest and most influential retailers.
When someone dies after a long transformative illness, it sometimes helps to think of that person in his or her prime, so we would like to take you back about 20 years to a pair of busy little shops on Prince Street, Otto for men and Tootsi Plohound for women, full of chic footwear including shelves full of Free Lance, Alfred Sargent and Jean Baptiste Ratureau.
There, that feels better.
Previously, Dying A Slow Death: Otto Tootsi Plohound Exits SoHo,
Upcoming International Arrivals: Argentina Sends Etiqueta Negra To Lafayette Street