Christmas Is Almost Here
Let's Get It Over With

Kira Plastinina,
It Gets Worse 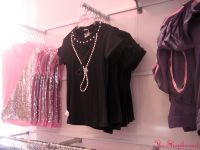 For those of you who haven't clicked through to the comments regarding the unfortunate Kira Plastinina meltdown, here's the prizewinner from a rightfully disgusted former employee identified only as "Management".
There's no holding back here. In fact we think a lynch mob may be forming, and we're not sure we would stand in the way.

I was a manager at one of the Kira Plastinina shops and am so disgusted with how the company went about with everything. There was so much discrimination, people who weren't paid, frustrations and scandals. Its crazy to think a company could away with so much. We were given less than a weeks notice about our jobs being let go..some people weren't given anything and just fired on the spot with NO reasons or explanations. We are at the point where we are getting kicked out of our locations, no rent has ever been paid, no electric bills have been paid and all our vendors will go bankrupt if the company doesn't find a way to pay them which I'm sure they won't. Our Russian head Director is in the USA and is going around to locations and taking the merchandise with her husband and computers etc. It's nuts we are so astounded. We are at the point where we are fighting for our paychecks. We all believe this was a cover up for some kind of dirty work or drug deal..something. But this company has been nothing but savage to us. They caused us soo much stress and pain it's unreal. Lawsuits are crazy and all of us were so mistreated. We worked SOO SOO hard for nothing. They just slapped us in the face.

Appalling.
If Russian dairy and juice magnates know what's good for them, they and their spoiled teenage progeny had better not show their faces around here anytime soon...or ever.

This company was utter bullshit. As a senior employee of the corporate office I can confidently confirm that The Russians treated the American staff like crap. No one was paid severance and most employees never recouped expenses. ONE WEEK before filing chapter 11 Nicole Ritchie was paid $150,000 to fly to Russia for the launch of Kira's 'high end' line. What a joke. For the extent of the company's existence the Russians never once listened to the incredibly talented team of staff they hired. They felt it more important to pour millions onto lame PR stunts than to make clothes people actually wanted to buy. They insisted on renting shop fronts in the tackiest, most high rent locations, where the line's low price points NEVER had a chance of covering the insane monthly overheads. Pathetic.

UPDATE: After the jump, we have reprinted an email from Phil Andrews of the Retail Action Project who is apparently here to help. It may be to late to protect the Kira Plastinina employees, but if you are a retail worker who suspects that your employer is about to go belly up and leave you with nothing, you may want to take note

We here at the Retail Action Project were just as surprised as you at the sudden demise of the Plastinina chain. Well, maybe not so surprised at the demise itself, but at the speed of it. For instance, I was on my way over to the Broadway store last week, the day I heard all locations would be shut by 6 pm, and the doors were locked by 3 pm.

So, here’s the message I never got to deliver. Hey, Plastinina workers: I work for the Retail Action Project (RAP) in Soho. We’ve been fighting for the rights of retail workers for the last four years. Remember the big to-do at Yellow Rat Bastard stores when the owner was forced to pay $1.4 million in stolen back wages for not paying minimum wage and overtime properly? That was us. We’re interested in hearing from you—even if there’s nothing to do about your former employer (who seems to be pulling up stakes and running back to old Russia right now), we can help you in the future. We offer free resume writing services, job placement and perhaps what you really need right now: help with filing unemployment claims.
Hope we can we help.

anyone who wants to contact me directly can do so at pandrews@rwdsu.org

thanks, shophound, for the reprint. i'm reading the blog daily for retail updates. keep up the good work.