Kira Plastinina,
It Gets Worse 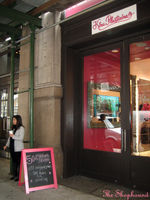 It turns out that the staff of the abruptly shuttered Kira Plastinina stores was nearly as blindsided as we were by the sudden demise of the nascent chain. Here is a comment from the non-anonymous (thank you) Grace Campbell, apparently a former employee

I am very bitter about how our US team was treated throughout this whole ordeal. We all worked hard and believed in the company but knew that it would all end in tears....

We'd be bitter too.
It sounds like the upper management was behaving pretty Scroogelike during a holiday season that couldn't be any Scroogier in general. If there are any other disgruntled Kira Plastinina employees out there (and we know there's got to be a bunch), here's your opportunity to sound off.
Email us, or leave a comment.
We want the real dirt, and you probably need to vent.
Bitch away! We're here to listen.
In related news, NexCen has laid off the entire staff of Bill Blass Couture as expected, but without severance! This includes workers who had been with Blass since he opened his company in 1970.
We feel confident that Mr. Blass is rolling in his grave as you read this. Former Blass staffers, feel free to bitch here too.
Previously, Over And Out: Kira Plastinina Officially Finished Today,
Too Much Too Soon: Kira Plastinina On The Rocks?
Bill Blass Couture Closes (WWD)