Today In Lack Of Business Troubles:

The Jolie-Pitts Get Hit
By The Ugly Stick 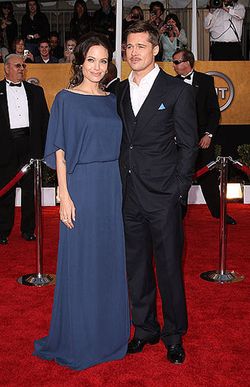 The Screen Actors Guild Awards were last night, offering yet another opportunity for glamorous Hollywood stars to get gussied up and pose on a red carpet as the second act in televised award show circuit leading up to the Oscars on February 22nd.
There were lots of pretty ladies in pretty dresses, and we can't possibly sift through them all. Style.com did, and you can see it here.
We do have to pause for a moment to ponder what we must call the curious case of the Jolie-Pitts, Angelina and Brad.
Here we have the two-time sexiest man alive with his companion who has been called the most beautiful woman in the world more times than anyone can count,
But not last night.
It would appear that both of them are on a campaign to subvert their natural beauty.
And how they have succeeded!
From what we can tell, Brad is finished filming Quentin Tarantino's WWII epic "Inglorious Basterds", so it would be time to lose that oily Errol Flynn mustache. He looks alright with it, but not nearly as good as he does without it. As for his Tom Ford suit, it looks well tailored but in desperate need of a tie. Also, it apparently is not a tuxedo, which it should be at a black tie event. And, finally, those pants are way too long, which is inexcusable in any event.
And on to La Jolie, who told E!'s Giuliana DePandi Rancic that she just wanted to wear something comfortable.
Well, shoot, Angie, you should have just worn your bathrobe. We're betting it looks a lot sexier than this drab, shapeless bit of Max Azria frumpery. Of course, she'll always have that gorgeous face, and thankfully, she had decided not to grow a mustache of her own, but geez! We're your fans. What did we do to deserve this?

He looks like a Hill Billie with that mustache.