Is Cleo & Patek Shutting Down, Or
Are They Just Trying To Fake Us Out?

The Times Puts The Spotlight
On Chicago's Ikram 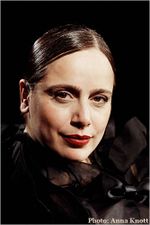 Most retailers will be attending Fashion Week facing challenges to choose the merchandise that will keep their stores afloat until customers feel like shopping in force again. One, in particular, however, will be coming in a new position strength. Chicago's Ikram Goldman, owner of the boutique that shares her given name, has been operating as First Lady Michelle Obama's fashion adviser and a clearinghouse for her wardrobe, commissioning designers to create special items, most of whom also do business her store. In today's Thursday Styles, Cathy Horyn and Eric Wilson team up to paint as detailed a picture as they can of how Ms. Goldman operates, in spite of the fact that she is still not talking to the press, and doesn't look like she will anytime soon.
Does the intense attention attracted by Mrs. Obama's wardrobe create a conflict of interest for Ms. Goldman, allowing her to use the White House as a marketing tool for the brands she sells? Well, assisting in the First Lady's wardrobe choices is not exactly like having a defense contract, but some are wondering if Ikram's participation is limiting Mrs. Obama's options, though the store has asked for clothing from other designers like Tracy Reese, whose label it does not normally carry. It's unusual that Mrs. Obama wouldn't want to shop in the showrooms of New York as most of her predecessors have (usually at wholesale cost). This is certainly a more convoluted way of managing a wardrobe, and it also has the effect, intentionally or not, of keeping designers at arm's length from the White House. We're not sure if the Inaugural gown designer and overnight fashion superstar Jason Wu has even met Mrs. Obama yet. He certainly hadn't before he made the now famous dress.
It will be interesting to see of the First Lady continues this complex process of dressing herself going forward, but one thing is for sure. Given Mrs. Obama's new fashion influence, we are willing to bet that Ikram Goldman's presence at runway show next week will be almost as coveted as that of Anna Wintour herself. Look for her to move up to the front row.
Behind the First Lady, a Shadow Stylist By Cathy Horyn & Eric Wilson (NYTimes)
Ikram (Official Site)