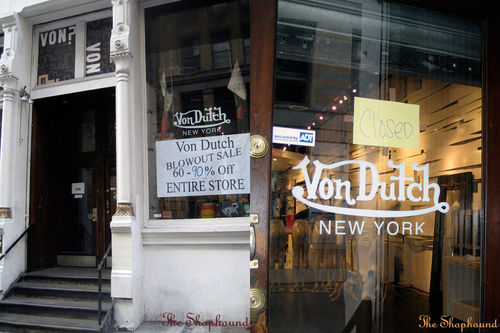 Look, we were can't pretend were too thrilled when this place opened, and it looks like we weren't the only ones. The Von Dutch store on Spring Street is closed after a little over two years.
All aesthetic prejudices aside, the brand's appeal seemed to have long since peaked before this store even opened. Its customers had already transferred their loyalty to the even less appealing Ed Hardy leaving Von Dutch in a state of diminished relevance.
As we have mentioned before, this isn't really a great time to cheer a store's closure, but, obviously, we aren't exactly weeping over this loss.
Shakeouts have their purposes.

OMG they are closing? HORRIBLE