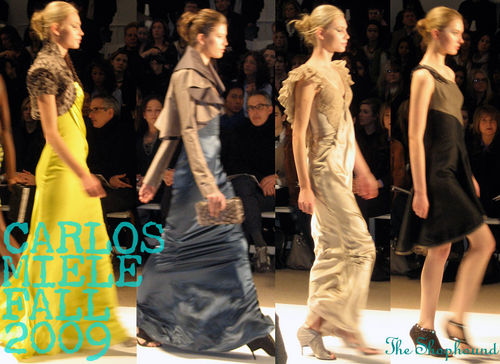 Fashion Week kicked into full gear on Monday, but the tent scene is still remarkably subdued. The sponsors have pulled back considerably this season. The Havaianas booth is not the flip flop giveaway of seasons past, but a wheel of fortune game where you can possibly win a pair. Sony has left the lounge where it was promoting its new mini laptops with the live mannequins after only two days, and sustenance offerings so far have been limited to Diet Coke, which is being offered in mini-bottles that are at least cold. We pampered showgoers are felling a little shortchanged. Where are our cookies? 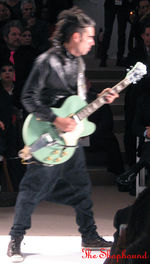 Anyway, we began our day at CARLOS MIELE, the Brazilian designer who last season presented singer Seu Jorge to accompany the show, this time asked musician Max de Castro to perform on the runway. As he sauntered down the catwalk amongst the models the photographers in the pit repeatedly howled at him to get the hell out of their way, which he graciously ignored. After all, he was probably only doing what he was asked to do. As for Miele, he presented his signature spiral cut gowns in sleek neutrals and pared down silhouettes that looked modern along with lots of furs which accounted for the bag inspections before the show.
JILL STUART presented her collection in the main hall of the New York Public Library Having now been invited there twice, we can say with certainty that despite its architectural beauty, the location is an atrocious place for a runway show, at least it is the way she arranges it. There are no risers, ruining the view for anyone behind the second row, and most of the show takes place on a hallway with not just columns, but large walls obstructing the view of anyone standing, which includes a large group.  As we waited for the show to begin, we could see an escalating paparazzi eruption, but had to wait for word to travel through the crowd to find out whom it was for. When the show started, we could see models for only a few seconds through an archway as they flashed past. Even those seated in what should have been good seats had to crane their necks to see the show. It is time for Ms. Stuart to consider a venue that will actually allow her guests to see the show.
Later on, we returned to the tents for Amsterdam based TONY COHEN's far more civilized show for his rough edged silk and leather separates. It was tunic and leggings time, confirming the return of the 80's aesthetic. 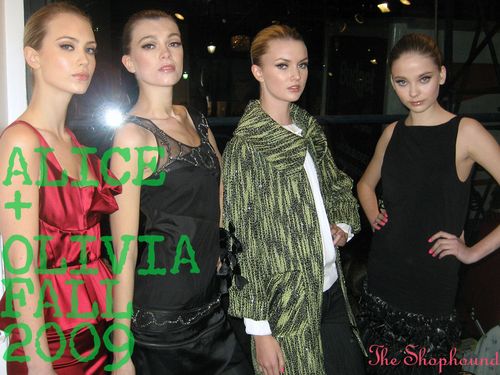 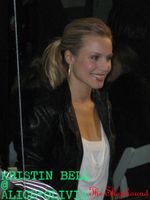 but while most presentations have been relatively easy affairs to slip in and out of, this one was a commotion. The store was packed, so the presentation was not particularly visible, but the champagne and cupcakes made up for that. What Bendet was really presenting was a glamorous cocktail party, featuring celebrity guests. We missed Paris Hilton, Kim Kardashian and a gaggle of other starlets, but managed to catch Moby and our favorite petite starlet, Kristen Bell of Heroes and Veronica Mars, so it was worth it after all.
The it was a quick jump downtown for an actual presentation from GENERRA where 27 models were lined up on a platform for our perusal. The label's sportswear continues to appeal, especially on 27 cute models who we managed to catch before they got punchy from standing in the same spot for two hours. 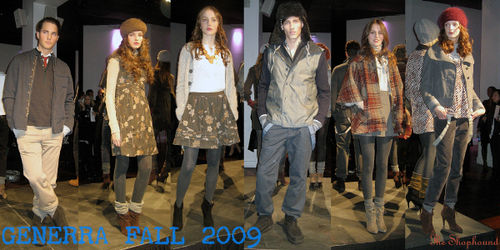