What can we say? The main tent activity has been a little lacking so far this season. The Viactiv giveaway was as close as we have gotten to free snacking so far. There are no cloyingly sweet cookies from DHL, and last season's Lu Petit Écolier cookies are nowhere to be seen. We practically lived on those things last time around. Perhaps things will perk up later in the week, 'cause we get hungry. In our malnourished stupor, we are treated to a survey of Barbie through the years as we wait to get into the shows, so we have shared that with  you to compare and contrast. Which Barbie did you play with... or steal from you sister and render bald?
And yes, we are way behind in the age of liveblogging, but let's cover Sunday quickly. 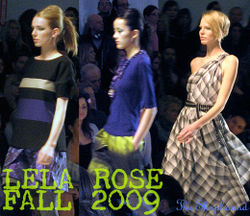 Our day began with LELA ROSE in her usual Sunday Morning opener slot. This show regularly pulls in lots of clients in their own Roses, and Lela has developed a devoted cult, including fellow Texans from Neiman Marcus who were there in force along with their Yankee Bergdorf cousins. Rose has developed a recognizable sense of proportion and detail, and her layered petal shaped tiers have become a signature. This time she focused more on sportier looks but her cocktail styles were the crowd favorites. Her front row lineup included former American Idol Kellie Pickler, her hair tamed from the previous day, in a blue satin one shouldered sheath from Rose. She looked adorable and would have been perfectly turned out for cocktails at 6. It was however a bit much for the brunch hour, but as we will see later on at HERVÉ LÉGER, time of day has no bearing when you are being styled for the front row. 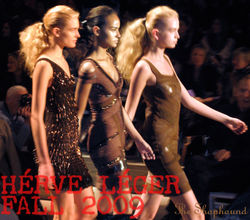 The Léger Show, unfortunately has gotten more press for the fact that not one but two models ate the runway than for the actual clothes (Jezebel has a detailed report here). We're not quite sure why this rash of tumbling models continues. The one time Naomi Campbell fell down on Vivienne Westwood's runway was a scandal that resonated for years afterward. Did anyone ever hear of Cindy Crawford or Linda Evangelista or Christy Turlington falling down? No. We don't think they or any of their fellow supermodels ever did. Maybe it's the fact that some of these girls are too young to be expected to walk with finesse in any shoes. Léger's tumblers are 15 and 17 years old. Maybe it's the fact that these models are being put into shoes so absurdly exaggerated that nobody should ever be asked to walk in them.
Aside from the runway incidents, our main question was whether or not Max Azria would be able to keep the classic Léger bandage dress looking fresh, and to our surprise, he succeeded in adding all sorts of treatments and embellishments to keep the tight, stretchy dresses appealing. Many have detected a Balmain influence, and we wouldn't argue otherwise. Azria's celebrity row included a gaggle of starlets poured into bandage sheaths led by Lucy Liu, a cut above the boilerplate fashion show B-listers we have come to expect, and January Jones, looking very un-Betty Draper.
The we skipped a few shows. Thuy, we're sorry, but we have a shred of sanity left to protect. 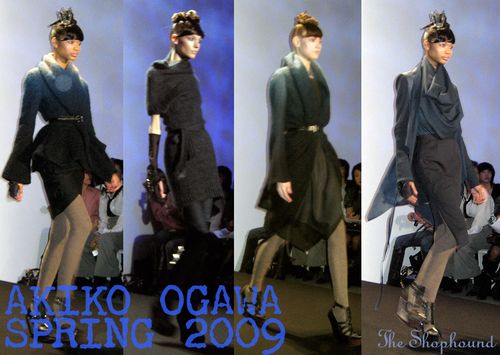 We reserved energy for our evening shows, starting with AKIKO OGAWA. This is usually a fun show with over-the-top styling.

This time, Ogawa filled the tent with blue mist to create an interesting atmospheric effect, but by 6:30, we had been sitting in it for over a half an hour. Our eyes were beginning to burn and the rest of the room was groaning.  On the plus side, the lovely people at Seventh House put us in the second row, a perfect vantage point. See, no heads covering the feet in our pictures. The collection had a Rick Owens meets Tinkerbell vibe, and once the smoke literally cleared, it was quite enjoyable. We noticed that a few of the girls sported black combat boots instead of the immense platform wedges, and then we realized that they were actually boys. That was the best way to differentiate the smatering of menswear looks in the show.
Next we speedwalked down to the Roubini Casa showroom in the New York Design Center on Lexington Avenue for TULEH. We got there just in time to catch Gossip Girl's Kelly Rutherford swan in dressed in full, soignée Lily Van Der Woodsen Bass mode. 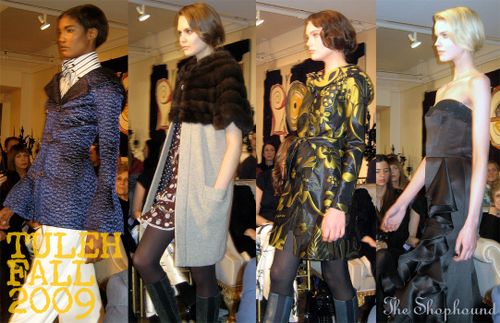 We miss the convenience of seeing Tuleh in the tents, especially at 7 in the evening, but we have to admit that a spacious design showroom filled with carpets and ornate furniture couldn't have made for a better setting for the typically refined collection. 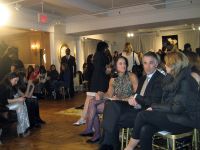 The models snaked their way through the room, and seating was arranged so that nearly everyone was in the front row, or the second at the very worst. We can't help liking a show that opens with Sessilee Lopez, and for Fall, designer Bryan Bradley stuck with what he does best, the luxurious fanciful classics that his loyal customers expect. Anyone expecting luxury designers to reign in the opulence this season have missed the point. Bradley understands that the best way to retain his customers is to make his products as irresistibly appealing as possible, so he stuck to his label's signatures like extravagant fabrics and classically feminine silhouettes. His client-heavy audience got the message and appreciated it.
Our next show was E.J. Wada in the tents at 9PM. On Sunday.
We call this the death slot, partly because people like us often ditch it. And we did. As much as we like to see a new designer, our apologies go out to E.J. Wada. We have our limits, after all.

More details and pictures after the jump 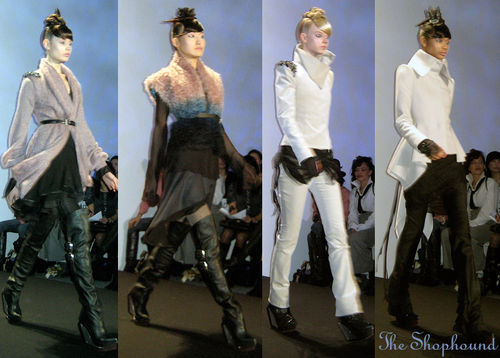 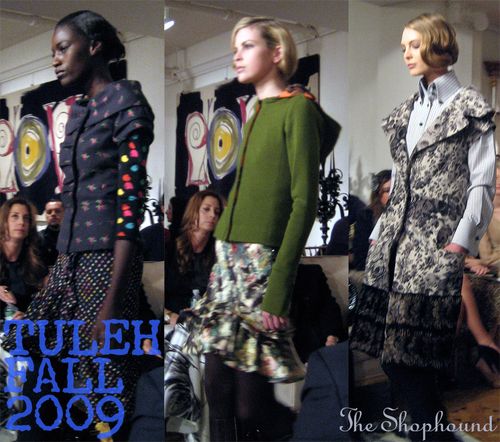