Best News Of The Week:

UNIQLO + JIL SANDER
The Person, Not The Brand

Closing Before Their Time: 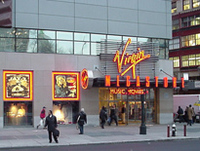 Here's some disturbing news about the impending loss of New York's only major music stores, the two Virgin Megastores in Times Square and Union Square. According to Michael Stoler's report in The Real Deal yesterday, the stores remain profitable. The Times Square unit, once the jewel in the crown of the chain, made $6 million in profits on $55 million in sales. Union Square's $40 million gross also yielded profits according to Stoler. Apparently, someone is still buying CDs. They are only closing because the chain is now owned by its landlords, Related Companies and Vornado Realty Trust, who are shuttering the stores in favor of tenants who will pay a higher rent. In fact Forever 21 is taking the Times Square space for a reported $20 million a year. They are going to have to sell a lot of those cheap dresses.
Here's the thing: usually, stores close because their business is bad, but Virgin's isn't. In fairness, it's probably because they are the last player standing in the record store game, but while their market is shrinking, it hasn't vanished just yet, and may still be viable at their two stores for years to come. Even when Tower Records closed as a result of bankruptcy, its New York City stores were cited among the chain's few profitable locations.
So what's the big deal? When the Virgin stores are gone in a few months, there will no longer be a single major store in New York City devoted to music. There will be a few independent specialists, and major releases will be found at places like Best Buy and Target. Anyone looking for a wide selection of import CDs, classical music or anything out of the ordinary will be forced to search the internet, which may seem more efficient, but can never really match the convenience of simply walking into a store with a vast selection to buy something you can count on them having.
So why is this happening? It's because Virgin is now owned, at least until it is folded completely, by people who aren't remotely interested in being retailers. It's a doomsday scenario for any store, profitable or not.
Goodbye to America's Mega-Music Stores By Michael Stoler (The Real Deal)