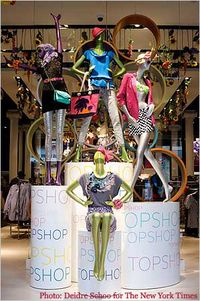 Even though she took her time getting around to it —getting there only minutes before it officially became old news— Cintra Wilson's review of Topshop is worth waiting for, though we dearly hope it is the last one we will see. In tomorrow's Thursday Styles, the Critical Shopper du jour has not come to any wildly unexpected conclusions about the British wonder-import, but her own special way of expressing them is, as usual, enormously entertaining.
Wisely, she manages to use her clout as a New York Times writer to cut the ridiculous fake line that apparently persists at the store's entrance. Readers may remember that The Shophound endured the indignity of the line on opening day, but, in our defense, we were being plied with sugary snacks and practically showered with gift cards and tote bags. It was totally worth it at the time, but presumably those perks are long gone. Once inside, La Cintra is a font of observation, most notably that she has discovered the epicenter of the '80s revival.

Everything looks so sarcastic and right-this-second trendy as to be planning for a near-immediate obsolescence. Despite my willingness to wait in the endless fitting-room line, I was unable to find one thing I really wanted to try on; I happen to know from experience that 1983 is unlikely to last forever.

So true. After all, it didn't last all that long the first time around. We can't help agreeing with her that the style revivalists in charge of such things don't always use the best judgment.

The problem with fashion going Back to the Future of 1983 is that for some reason, the recrudescence of trends from any year tends to embrace the unhip and the clownish. It’s not what the cool people wore in 1983, but the Urkels, the Screeches, the Tiffanys, the hapless wannabes. These are cuts, prints and colors that I never liked on anyone, ever, for the simple reason that they look goofy, infantile and unflattering.

And there's a trenchant point. A decade's style seems to be best remembered by its lowest common visual denominators. While there are certainly many who fondly remember the '80s as the elegant and innovative heyday of Geoffrey Beene, Perry Ellis, and Comme des Garçons, to most people it's all Dynasty, Debbie Gibson and Donna Mills' rainbow eyeshadow and poufed hair. It just depends on whether your reference point was, say, Charivari or Contempo Casuals.
As for Topshop, you'll have to read on for yourselves to find out if La Cintra discovered any little treasures for herself, though if you have come to know her as we have, it's not much of a guess.
Critical Shopper | Topshop Past the Bouncers: What a Feeling by Cintra Wilson (NYTimes)
TOPSHOP 478 Broadway between Broome & Grand Streets, SoHo