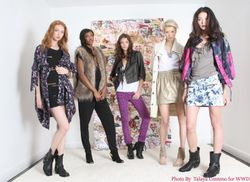 Macy's has announced that they will be launching an exclusive contemporary collection called Rachel-Rachel Roy with the New York designer. That's Rachel ROY, not Rachael Ray, the grating TV show host and donut pitchwoman.
The line, retailing between between $59 and $299 will début in 85 Macy's locations this August in specially designed environments, and will be a full lifestyle collection including apparel, accessories, shoes and jewelry. The designer tells WWD: “This line is the younger sister to the Rachel Roy collection. It has the same designer sensibility but with a younger feeling. This is the customer that I used to be — and maybe I still am every once in a while.” It also marks a return to the contemporary category, where Roy (not Ray) originally launched her namesake label before upgrading it to a full designer collection.
And how does Ray's soon to be former husband, the reportedly bankrupt erstwhile hip-hop mogul Damon Dash fit into this mix? Just barely. He still retains an ownership stake in Roy's label, though the brand is now controlled by Jones Apparel Group which bought a 50% share of the brand last July, and owns perpetual licenses for nearly all Rachel Roy product categories and will produce the line.
Despite softness in the contemporary department business recently, Macy's CEO Terry Lundgren is optimistic about Roy's prospects at Macy's. “There is a great deal of opportunity for this affordable, young, but still with designer details kind of line,” Lundgren tells WWD. “When I met with Rachel some time ago about the idea of launching a brand like this, she was very clear about who this target customer is, and I have been very encouraged by what I see in the product.”
Going Steady: Rachel Roy Designs Line for Macy's (WWD)