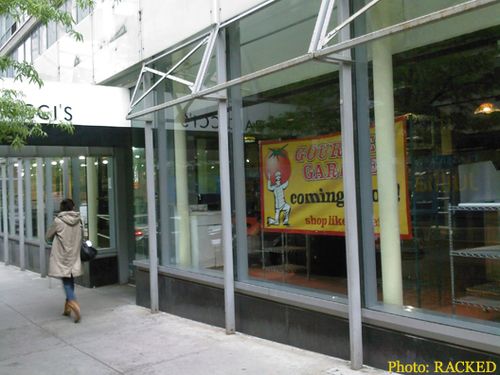 First of all, we have to thank our friends at RACKED for saving us a 30 block trip take a picture.
We had heard that Gourmet Garage had made an offer on Balducci's former flagship space in Chelsea, but now there is photographic proof that they are definitely opening in the space the gourmet chain vacated on West 66th Street. This is good news for the neighborhood because they won't have to wait long without a convenient gourmet market, and two big empty spots in that Lincoln Square building (it also held a large Circuit City) would be just too depressing. Hopefully, some former Balducci's employees can pick up a new job.
As for the Chelsea location, we have no word about a replacement for the former New York Savings Bank which is actually in the National Registry Of Historic Places (Really, there's a plaque outside). For Gourmet Garage, it would be a somewhat more lavish upgrade from the chain's usual bare-bones look, but already outfitted to be a food store. It's also rather close to it's 7th Avenue West Village location, which would be unusual for the chain which has typically kept a nice hefty distance between its five (soon to be six) locations.
The space could certainly do worse for a tenant. We just hope it doesn't wind up as a Chipotle Mexican Grill or something...oh wait, that's Food Bar.
Grocery Switcheroo: Gourmet Garage Replaces Balducci's (RACKED)
Gourmet Garage (Official Site)

The buzz in the nabe is that the old Balducci's space will soon be a CVS drug store. That would SUCK.