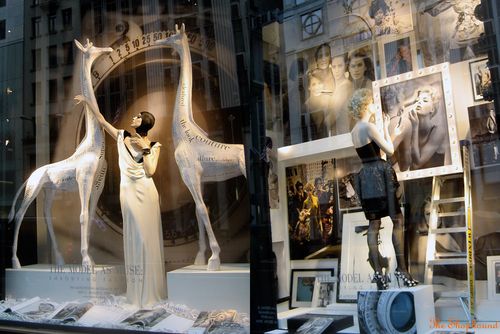 If you couldn't make it to last night's Costume Institute Gala at the Metropolitan Museum of Art, you can at least stop by Fifth Avenue to catch a view of Bergdorf Goodman's latest set of windows. This week, they are inspired by the Met's new exhibit, The Model As Muse, and feature clever recreations of famous fashion photographs. There's a nod to Cecil Beaton's deco ballgowns, a mod moment with Twiggy by Bert Stern, Peter Lindbergh's troop of Chanel clad Supermodel biker chicks, and even a recreation of Richard Avedon's iconic "Dovima With Elephants" using a pair of giraffes as stand-ins. We particularly liked the mirror effect created by Steven Meisel's famous shot of a peroxided Linda Evangelista for a Dolce & Gabbana advertisement (though the actual dress in the window is by someone else!).
The windows were just being finished as we write this, so you probably have couple of weeks to see them, and the Costume Institute exhibit runs until August 9th.
As for the Party of the Year, we're still waiting on the pictures from Style.com, but Cathy Horyn's blog for the Times tells us of a last minute kerfuffle with a miffed Azzedine Alaïa, who created several dresses for models to wear to the party, but was not invited himself! As a result Alaïa muses and devotées Naomi Campbell and Stephanie Seymour say they're boycotting the party, which leaves the ranks of actual Supermodels a little thin.
Really, if RuPaul isn't there, then what's the point anyway?
Alaïa Pulls His Dresses From the Met Gala (On The Runway)

Click images for a larger view in a new window.