House Of Ungaro Chooses Starlets
Over Its Designer 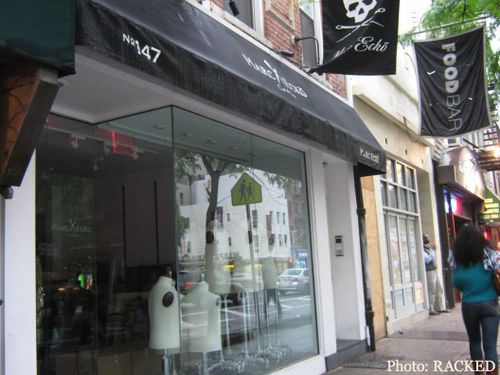 We were never convinced that 8th Avenue between 17th and 18th Streets was a good location for the Marc Ecko Cut & Sew boutique. Nevertheless, the store hung on for a good year and a half or so. It tried its best to ingratiate itself with the Chelsea natives by advertising in HX and even selling the occasional circuit party ticket, but it never really became a hub of activity despite the physical improvements it made to the hopelessly trashy former home of Bang Bang.
Unfortunately, it was the merchandise on the shelves that didn't connect with the locals, and while one could argue that it was an alternative to Chelsea's trendiness, a quick look around would have told anyone that there were better locations to be had for a brand that used Playboy's "Girl Next Door" Kendra Wilkinson in its latest ad campaign (although, Kendra's camp appeal probably went a lot further than the label's style ...but we digress). It was no surprise to discover thanks to our friends at RACKED that the store finally closed its doors sometime this past week. Ecko has been having dodgy luck as a retailer recently. A highly touted Times Square flagship location was rented for years without ever opening. Here's hoping that his next venture gets closer to his customer and the next occupant at 147 8th Avenue has better luck.
Marc Ecko Cut & Sew Snuffed Out in Chelsea (RACKED)
Previously: Marc Ecko Cut & Sew: A Chelsea Head-Scratcher