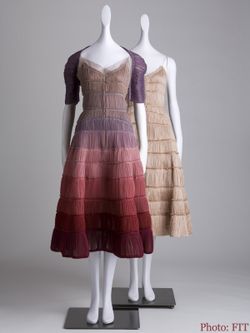 New York has something of an embarrassment of riches when it comes to fashion museums with a continuing roster exhibits not only from The Costume Institute at The Metropolitan Museum of Art, but also The Museum at FIT as well as occasional shows from the likes of the Museum of the City of New York and others. We are currently graced with two major shows including the Met's "The Model As Muse" extravaganza and FIT's "Isabel Toledo: Fashion from the Inside Out". The two shows are so different that it is almost pointless to compare them, except that one succeeds admirably, and the other sadly disappoints.
Isabel Toledo's profile has risen dramatically since Michelle Obama chose the designer's now famous lemongrass wool lace ensemble to wear at her husband's inauguration in January. Curators Valerie Steele and Patricia Mears get that famous outfit out of the way quickly, showcasing it alone in the exhibit's anteroom. Famous as it is, it is not Toledo's most interesting work, although photos showing its creation reveal that the original design was slightly more elaborate. 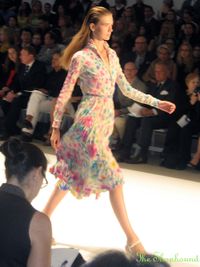 The show really starts in the museum's cavernous main room. While she has been well known to the public for only a few months, the designer has been admired by fashion insiders since her first show in 1985, and this presentation focuses on her rigorous design philosophy and innovative techniques, not unlike FIT's previous shows on Madame Grès and Ralph Rucci.
Most examples are accompanied by abstract flat sketches of the garments' patterns, illuminating Toledo's ingenious cutting methods. For all the focus on the technical details of dressmaking, the show could run the risk of becoming a dry academic exercise if it weren't for the gorgeous clothes. Toledo's style runs the gamut from puritanical to erotic (sometimes within the same outfit), and her wit and humor comes through in the mysterious alchemy that great designers work with their creations.
Her inventive hand with materials and sculpting garments puts her on a par with Rucci and Azzedine Alaïa, another Obama favorite. The show almost skips over Toledo's brief but promising tenure as the designer for a revived but aborted Anne Klein Collection (the accompanying catalogue goes into greater detail) except for a painstakingly tailored coat in pink wool and a series of silk pongee "Broomstick Librarian" dresses handpainted by the designer's husband and collaborator, Reuben. He also provides a 500 foot paper frieze filled with his inimitable drawings and paintings of his wife's work circling above the exhibition spaces.
It's their collaboration that is at the heart of the show –another strong and thoughtful showing from the team at FIT
And now uptown to the Met.

More about the Costume Institute after the jump as well as videos about both shows from The Met and New York Magazine.

By now, you have surely digested the press frenzy over the Met Gala that kicks off its annual Big Show. Unfortunately, this year marks the second in a row that the Costume Institute has chosen a subject that The Shophound had high hopes for, and fumbled.
Let's just say that nobody would be more excited about an exhibit focusing on great fashion models than we would. We love models, and not in a stalkery kind of way. They genuinely bring fashion to life, a point unintentionally made by the Costume Institute's choice to re-create famous photographs with mannequins and backdrops. This fruitless exercise illustrates only that the museum has some of these famous clothes in its collection. There is no way to replicate the grace of Avedon's "Dovima With Elephants"with mannequins, and the curators should have known better than to try.
In fact, the main problem is the clothes. They are totally superfluous here. Most visitors were busy examining the pictures and magazine pages and reading the model mini-biographies which were placed inconveniently below knee level so as not to block the clothes. The fact that the museum had a Balenciaga jacket worn by Lisa Fonssagrives in a famous picture really tells us little about the iconic model –less than the actual picture does, anyway.
Arranged chronologically, the exhibit traces various models starting with the post WWII era when they first gained prominence. Ultimately, most of the models chosen are the expected ones, and the show uncovers no lost stars. Actually, it's the omissions that glare, most notably the greater part of the 1980s just before the dawn of what we can call the "Supermodel" era. Somehow the show jumps right from Studio 54 to Linda Evangelista blithely skipping over huge stars like Christie Brinkley, Carol Alt and Paulina Porizkova who are represented only in small display of Sports Illustrated covers with no accompanying bios. 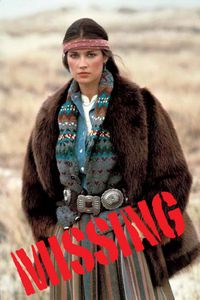 Isabella Rosselini? Kelly LeBrock? MIA, as are models who had long collaborations with designers like Ralph Lauren's first advertising muse, Clotilde, for example (pictured at left). She was known by millions for years only as "The Ralph Lauren Girl" but established a pattern of designers' forging their media images in exclusive collaboration with models. That's actually significant, but ignored. Also missing, any reference to the extravagant, theatrical runway shows of the 1990s, where the Supermodels really shone. Even one or two videos from a John Galliano, Gianni Versace or Thierry Mugler show would have easily shown how these women were able to capture the public's attention like none who had come before them. Also underrepresented are photographers like Bruce Weber and Herb Ritts, who had a huge impact on fashion imagery, while Peter Lindbergh and Steven Meisel are lavishly showcased.
We are given (as we predicted) George Michael's "Freedom '90" video, which showcased Evangelista, Naomi Campbell, Christy Turlington, Tatjana Patitz and Cindy Crawford and cemented their fame on MTV, but unfortunately the exhibit rarely rises above the most obvious choices. The music played in the room devoted to grunge fashions: Nirvana –of course.
We could go on and on, but still, the show is not entirely without its pleasures. Stand in the cramped passageway where the stars of the 1970s like Jerry Hall and Beverly Johnson are shown in framed Vogue covers and listen to visitors' shocked reactions upon discovering that TV reality show harridan Janice Dickinson really was a mesmerizingly beautiful model once upon a time (when you didn't have to hear her).
Now that's interesting.
Isabel Toledo: Fashion from the Inside Out Through September 26th at The Museum at FIT Seventh Avenue at 27th Street, Chelsea
The Model As Muse through August 9th The Costume Institute at The Metropolitan Museum of Art 1000 Fifth Avenue at 82nd Street, Upper East Side