Ruehl Gets The Axe

The Right Place At The Right Time:

A Model Moment At Barneys Designer John Bartlett pitched a tent last night in front of his West Village boutique to house a cocktail soirée celebrating its temporary conversion to a Father's Day weekend pop-up showcase for his premiere as the designer for the newly overhauled Claiborne men's label. 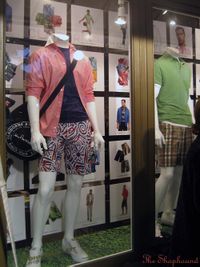 The line has been most unfortunately neglected by retailers like Macy's for reasons we still can't figure out –especially now that we have finally seen a good bunch of it displayed as a collection. That's too bad, because from today through Monday June 22nd, his boutique will be filled with the kind of bright, updated sportswear that would be a welcome shot in the arm for a any department store, with most items attractively priced well under $100. 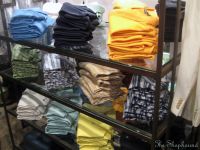 Smartly, Bartlett has taken matters into his own hands to make sure that New Yorkers like The Shophound have the chance to get a look at the revamped collection for the first time. We found reworked, modern classics like pique polos, linen shirts, swimwear and seersucker shorts with John's signature details as well as the superbly cut trousers for which he has become known.
Last night's party drew a mix of friends and fashion folks including at least one former "Project Runway" contestant and a "Real Housewife" of New York (Alex McCord? –which would surely have excited us more if we could bring ourselves to watch the show). We left with a hefty canvas beach tote filled with a fresh yellow Claiborne pique polo (size XXL, unfortunately*, but at least you know he does make that size should you need it), a bottle of water, a handy little notebook and two tasty chocolate chip cookies from The City Bakery, Bartlett's next door neighbor who catered the party.
Knowing John, there's a better than even chance that you'll find him manning the store himself this weekend. He's fun to talk to and he makes great clothes (and we're not just saying that because he gave us cookies) so do stop by for an opportunity to chat with your friendly neighborhood two-time CFDA Award winning fashion designer.
Claiborne by John Bartlett Pop's Shop Through June 22nd at 143 Seventh Avenue South at Charles Street, West Village
*UPDATE: Showing exceptional gift bag form, the fine folks at Claiborne have kindly offered to re-size our swag polo. 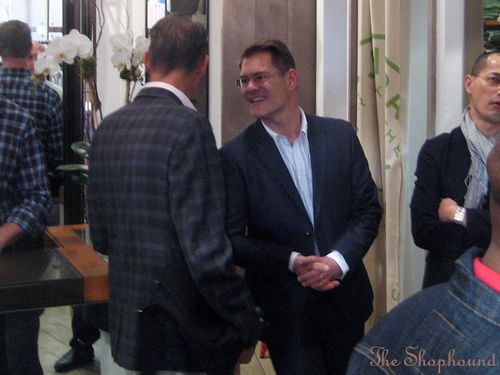