Does The Future Hold Hope
For Christian Lacroix? 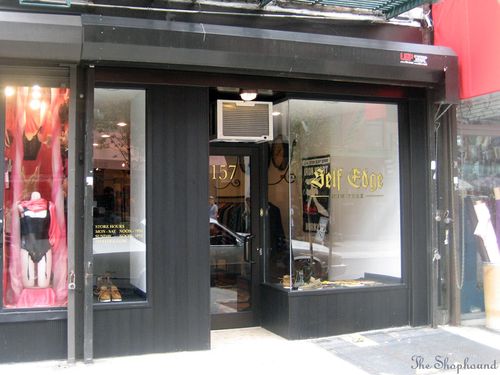 As reported, San Francisco denim boutique Self Edge opened its Lower East Side location on schedule last Friday right next door to Orchard Corset, and if you think New York has already seen the last word in jeans, then think again.
Anyone heading down to Orchard Street looking for a pair of comfortably washed and lovingly hand distressed dungarees should keep on walking down the street to Earnest Sewn for one of their (perfectly respectable) myriad washes. Self Edge is for hard-core denim aficionados, and by hard-core, we mean hard denim. The jeans here are raw and heavy, with their selvage side seams intact. We saw a pair by Iron Heart made from 23 oz. denim so stiff that the pants standing up by themselves was a foregone conclusion, much like some of the foundation garments at the store next door. Cardboard-like would be a fitting description, and we can only imagine with horror the chafing and abrasion that would accompany the extended breaking in period these pants might demand. This pair, however, was an extreme example of Self Edge's merchandise, most of which is much more easy to wear, but the fashion story here is basic and rugged. Though there are several jeans brands represented here including Flat Head and Sugar Cane, you probably haven't heard of any of them. They are mostly independent niche brands dedicated to preserving artisanal manufacturing techniques, and not contrived design, so the basic five-pocket style with minimal decorative stitching is the standard here. You'll have to bedazzle them on your own.
Of course, even without all the extra finishing processes, many of the jeans at Self Edge still hit the $300 mark and then some, but the store has more than just jeans including lots of shirts in typical vintage and western inspired stripes and checks, and a few shoe styles made for 3sixteen by cult bootmaker Quoddy. There is even a rack of belts in sturdy leather with heavy brass buckles waiting to be broken in along with your jeans, as well as a burgeoning private label line.
Dedicated to keeping the experience complete, Self Edge will be receiving a vintage chainstitching machine in the next few weeks to make all alterations consistent with the styles in the store.
As you may have figured, the concept here is 'break them in yourself", meaning wearing jeans unwashed for several months so that all the little whisker marks and worn patches that will appear after the first washing are made by your own body and activity instead of a machine somewhere. Sometimes it's hard to convince people that (as long as you wear underwear!) it's perfectly fine not to wash jeans very often as long as they are aired out regularly and don't get heavily soiled. The end result is better fitting jeans with distressing that matches (and flatters) your own body. Trust us, we were converted by our first pair of Nudies, and if that doesn't convince you, think of the environmental benefit of forgoing all the chemicals and wash cycles that go into creating the stacks of denim at Seven For All Mankind.
Self Edge 157 Orchard Street at Rivington Street, Lower East Side
Previously: Denim Forecast: San Francisco Jeans Experts Heading East?