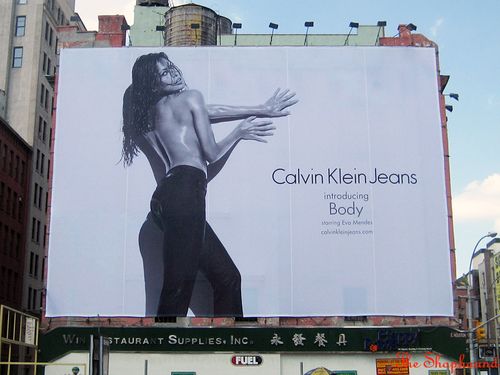 Is Calvin Klein looking to have the fastest billboard turnover in SoHo?
Just a few weeks ago, some vocal Houston Street denizens started getting vocal about the sexy threesome (foursome?) depicted on the huge ad space Calvin has controlled for a while now, but before the controversy could reach any kind of fever pitch, the image was abruptly changed to sexy supermodel Doutzen Kroes as a latter day Bo Derek, emerging from the surf in a skimpy red bikini. Now, a scant couple of weeks later, the picture has changed again. This time it's Calvin's contract starlet Eva Mendes modeling the new "Body" jeans, a high waisted style apparently meant to be worn without a top, but with a healthy slathering of body oil. Who hasn't been waiting for that look to come around again?
Ad watchers assumed that the change in images last month was due to public outcry. It wouldn't have been the first time the designer had to pull jeans ads (Remember the Steven Meisel "basement porn" campaign of the early '90s?). In fact, it looks like this ad space is on an accelerated schedule that keeps each image in view for only a couple of weeks, so perhaps the sexy three/foursome had simply completed its brief, allotted time on the wall. If that's the case, then your time to see a giant topless Eva is ticking away.