A First Look At Hollister

Scoop On The Ropes? 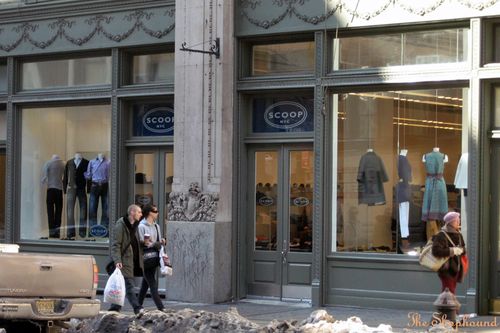 Scoop, the popular contemporary chain appears to be hitting a rough patch these days with a bunch of distressing challenges. This week, the SoHo Flagship store was hit by a protest from former employees who are suing the company for overtime pay and other questionable business practices including "promoting" stock and security workers to management positions without appreciably changing their duties, but restructuring their pay to a weekly salary, thus exempting them from potentially lucrative overtime pay. Many are West African immigrants who were fired over purported documentation issues, which they dispute.
And why should such a successful chain be so chintzy?
According to the lead story in today's WWD, vendors and factoring companies are growing impatient with Scoop which has been running behind on its payments to suppliers for several months. Factors are a quiet, usually rarely heard from component of the fashion industry who approve retailers' credit and help facilitate wholesale transactions. They are often the first to raise the red flag indicating that a retailer is in trouble. Vendors are often less willing to trifle with a long term retail relationship, and many are continuing gamble on shipping goods to Scoop, though the article seems to suggest that upcoming Fall deliveries may be held up.
While many still associate the now embattled store with its highly visible founder, Stefani Greenfield, she actually left the company last year, and the chain is now owned by Billionaire Ron Burkle's Yucaipa Companies. With such big backing, many are wondering why the relatively small chain (only eleven stores) is evidently so undercapitalized. Many observers (including this one) feel that Scoop, though it still carries appealing items and popular labels, has become formulaic since Greenfield's departure and has lost some of its luster and industry leadership. Its website suspended e-commerce over a year ago, and a promised redesign has yet to happen, although the actual stores also continue to occupy some of the most desirable retail real estate.
Will this month's misfortunes scuttle a once white-hot chain? Time will tell, but we are guessing that Billionaire Ron Burkle (we understand that 'Billionaire' is actually his real first name) is not ready to write off an investment made only two years ago, but eyes will now be on Scoop to see if the Fall goods that are arriving in other stores now start materializing on its floor as well.
Scoop NYC Feels Credit Squeeze by Lisa Lockwood (WWD)