Zilli's French Luxury To Hit Midtown
...Whether You're Ready Or Not 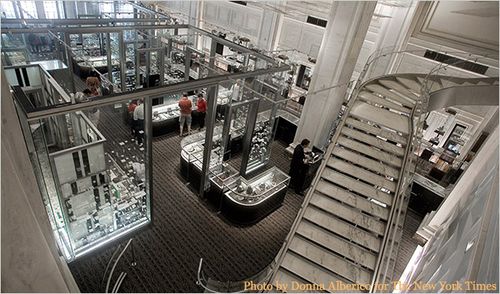 In today's Thursday Styles, Critical Shopper Cintra Wilson takes a restrained look at Tiffany & Company, an American retailing icon, but instead of visiting the famous flagship at 57th & Fifth, she has chosen to make her assessment of the newer satellite branch on wall street that opened two years ago. This week finds La Cintra in a more reflective mode, observing the irony surrounding a luxury mini-shopping district that has popped up at ground zero of the luxury bust. Instead of profligate Wall Streeters, Tiffany's downtown branch seems to be catering to the same tourists that throng the historic flagship store, who apparently don't care to be bothered while buying jewelry.

Three young Chinese tourists were excitedly viewing a gold necklace with a small diamond at the center, for $900.“Are you buying necklaces for your girlfriends?” I asked.
“He is,” said one with a backpack, pointing at his serious-looking friend.
“How did you know about Tiffany in China?” I asked the potential buyer. “Is it famous there?”
“I use the Internet,” he said, somewhat defensively.
“How did you know we are from China?” his friend asked.
The buyer became shy and hostile, and suddenly cupped his hands around the diamond he was viewing, so I couldn’t see it.

Clearly this tourist had no idea that the Nosy American Lady was going immortalize him in the pages of The New York Times. Overall, however, our shopper has practically given Tiffany a free pass compared to her usual treatment. She is admiring, but not effusive —almost polite, even. Perhaps the brand is just too monolithic to engage Cintra's attention too strongly one way or another.
Critical Shopper | Tiffany & Company If Bling Had a Hall of Fame By Cintra Wilson (NYTimes)
Tiffany & Company 37 Wall Street between Nassau and William Streets, Financial District