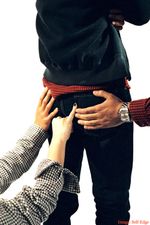 Jeans connoisseurs are abuzz about one of California's more arcane denim dealers, Self Edge coming to New York by the end of this month.
The San Francisco based store has built a loyal following for its stock of obscure artisanal brands featuring Japanese selvedge denim. In fact, the only brand we recognize on Self Edge's website is the Swedish cult fave Nudie, listed amongst smaller, often imported independent labels like Dry Bones, 3sixteen and Iron Heart. The store offers services such as vintage chainsitched hems at no extra cost along with their expertise and what appears to be an impressive depth of differnt models and fits.
This should be a refreshing infusion to New York's denim market where the same labels seem to proliferate throughout trend conscious retailers at breakneck speed.
Reportedly, the store will open on Orchard Street near Rivington on the somewhat beleaguered Lower East Side. Perhaps it will be recherché premium denim that will draw the shoppers the neighborhood needs.
Self Edge Coming to NYC (We Are The Market)
Self Edge (Official Site)