Lounge Won't Die
...And Other Stories

JCPenney Gets The Finishing Touches 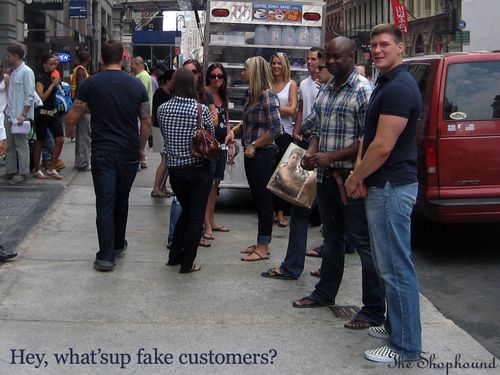 A Shophound commenter, Ryan, clarified our report that Hollister had hired "customers" to fill its new SoHo Flagship on opening day. He writes:

Um those 'paid customers' as you called them, are actually managers of Hollisters/Abercrombies from the east coast, there to see the store on it's opening day.
They weren't paid, they were there to support the opening of this really great flagship store.

Gee, Ryan, shill much?
So all those madras shirted folks carrying Hollister shopping bags, were really Abercrombie employees from up and down the East Coast invited to come and fill the store and "support" it, apparently by making it look busy —but they weren't paid.
Except they are employees of the parent company.
And they apparently took the trouble to come to Manhattan on opening day out of the goodness of their own hearts. Such devotion.
So, how is that different from what we said before?
Previously: Hey, What'sup? It's Hollister Dude!

Shophound, I totally agree with you. How else do you explain the CONSTANT line of customers on 5th Ave & in London, and probably now this store?!?!? I KNOW they say they're tourists from other countries who can't get that stuff "back home," or that they're "store managers" but seriously??? I don't buy it. A&F does some weird shit and I wouldn't be the least bit surprised at them having hired customers to create constant commotion. It's an interesting strategy.

They've got us buzzing about it. I would imagine they are monitoring this online activity and it only adds to cultural impact of the brand.

Let's be honest. That black dude is not a manager. This is Abercrombie we're talking about. I'm surprised they hired him at all.

God. Seriously. That douchebag wearing Vans.
Vans is a cool, REAL, Cali brand. Matching that with a FAKE Cali brand from OHIO just doesn't work. Stick to your 7 inch wide leather flip flops, douche. Nice tight 'muscle' polo, by the way.
Hey A&F, can you make the labels inside the shirts about 4 inches wider? Thanks.

We would get yelled at by our district managers if we even set them up with manager interviewees as "gross" as those people.