Inside The Lounge Outlet: 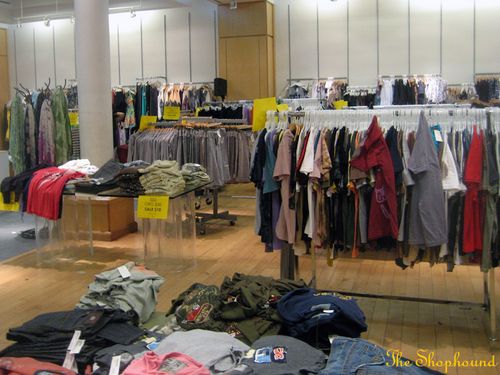 Will it be Lounge that is left after a nuclear armageddon along with cockroaches and Cher?
Once a reasonable trendy megaboutique in SoHo, Lounge was ousted from its Broadway home along with neighbor Eastern Mountain Sports) by Victoria's Secret, who apparently desperately needed vast space to sell bras & panties. This led to an extended "store closing" sale that featured endless tales of meaningless discounts due to inflated prices, invalidated gift certificates and a general descent into further seediness until the space was finally vacated. We were supposed to have been done with Lounge,  but then a "sample sale" appeared in the church once known as the nightclub Limelight. That  became shabbier and shabbier as the months wore on. In the meantime, a new Lounge was reborn at the Aventura Mall north of Miami —far enough away that we needn't concern ourselves with it.
And yet, the store goes on. Last week a new Lounge Outlet opened its doors a few steps from the old church with better lighting and tidier floors, but with the same aging crap for sale. Don't be fooled by the cheery yellow awning.
Yes, folks, if you are still pining for those Antik jeans with embroidery all over the back pockets that you didn't get four years ago, then rest easy. Lounge Outlet, specializing in a look we like to call "Early Douchebag",  has a table full of them. You know the look, and you probably know who wears it, too, and you don't want to be that guy or girl. In an interesting case of overkill, there is still a booth with a live DJ manning the decks, perhaps in hopes that rockin' scene can be conjured up on a Tuesday afternoon. 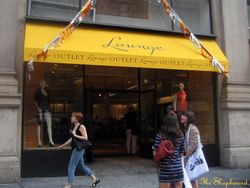 Now, we don't expect to find fresh, in-season merchandise in any outlet, but there comes a point after four or five seasons where nobody wants to see that stuff anymore... but not here. There is apparently no item to passé to pack a rack in this store, so buyer beware.
And the story doesn't end there. Owner Jack Menashe has hung on to the Limelight space and is planning a new store for the space. Perhaps he will offer bottle service.
Lounge Outlet, Sixth Avenue between 19th & 20th Streets, Chelsea

Re: Lounge employees/owners stole my identity
I am just reading this article now and I cant believe you mentioned the stores “seediness” because I had always thought something shady was going on there between the guys who owned or managed it, but when I found out from my bank that my identity had been stolen and then, after learning that they traced it back to Lounge in Soho that sealed the deal.

WROTE $$ THOUSANDS $$ in Orders for product they never paid for, then claimed product was never receieved, and finally that store didn't exist (which we all know just kept jumping around nyc)

Early Douchbag. Love it! What were they (not I because I didn't fall for that fad) thinking with the Antik jeans?!