Jil Has A New Label
+J At UNIQLO This Fall

The Scaffolding Shrinks
As Hollister Reveals Itself 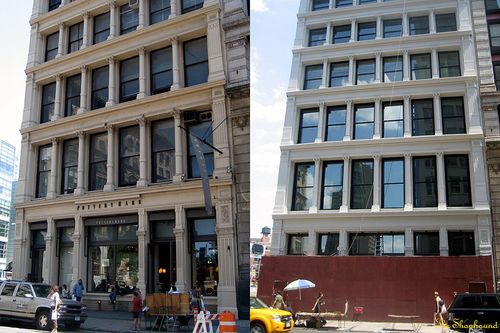 Even as it dissolves its ill-fated Ruehl division, Abercrombie & Fitch is getting ready to open Manhattan's first taste of its still popular Hollister chain. The plywood at 600 Broadway has shrunken to barely a single story revealing a façade that is...not appreciably different from what the building looked like when it was a Pottery Barn aside from a coat of white paint.
The so called "Epic" flagship store is set to open in just over a week, and the question here is not so much what to expect (we have a pretty good handle on their M.O. by now) but how much and to what degree?
We are well acquainted with the brand's boilerplate logo tees and flip flops by now, but are the "salesmodels" all going to be as gorgeous as we have come to expect? Will the older and somewhat less stunning still be banished to the stockrooms? How earsplitting will the music be? Will they be able to whip up a Topshop level of interest and frenzy? Giveaways? Well, that's probably a no on those last two.
Hollister's "Ride The Wave" mini site has a short film offering, along with the usual toned torsos, glimpses of the store's proposed interior which promises to be a beachy marvel of set design and art direction. It is, let's face it, atmosphere and ambiance that is the Abercrombie organization's real contribution to the retail business.
Hollister opens on Thursday, July 16th.