The September Issue
To Hit The Apple Store

Zilli's French Luxury To Hit Midtown
...Whether You're Ready Or Not 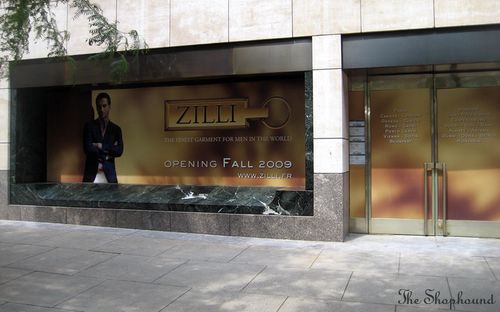 Have you been wondering where you can buy a crocodile bomber jacket now that you are tired of the ostrich one you bought last year? Perhaps one that can be matched with shoes and a belt?
That sort of slick extravagance has been missing from Manhattan's shopping scene since opulent men's boutiques like Bijan and Napoleon have left us, but not for much longer. French luxury label Zilli is preparing its first American boutique, joining the equally sumptuous but somewhat more restrained Brioni in the Four Seasons Hotel on East 57th Street, making a sort of nexus for sybaritic menswear in midtown.
Zilli's design tenets could be described as "Why use leather when perfectly good snakeskin will do?" or perhaps, "There's no jacket that can't be improved by lining it with mink." The brand's style is classic, but lavish —not garish and ostentatious, but more stealthily indulgent with a touch of glitz, and typically staggeringly expensive. It's aimed at the sort of vastly wealthy customer who remains recession proof, possibly slightly lacking in refinement, but hardly a full-on vulgarian —The kind of guy who will disrupt a classically elegant suit with pavé diamond and sapphire cufflinks.
Apparently, there are some of these left.
Think "shipping magnate with a deep tan" holding a man's clutch bag and riding in an armored limo.
We can't wait either.
Zilli (Official Site)